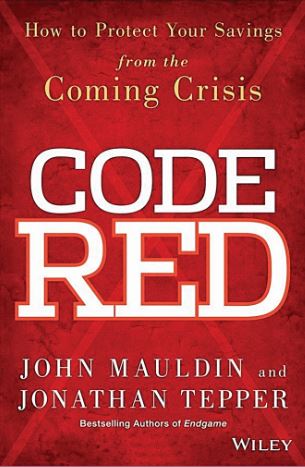 If you aren’t already unnerved by what Bernanke & Co. have been doing for the last five years – things like quantitative easing (QE), a zero-interest policy (ZIRP) and large-scale asset purchases (LSAPs) – then reading John Mauldin and Jonathan Tepper’s latest, Code Red, may leave you seeing red. It’s a maddening tale of the harm that has already befallen savers as well as a warning about the longer-term damage that may be in store for all of us down the road.

As always, Mauldin and Tepper are fun to read. They don’t just excoriate the Fed for propping up banks with trillions of dollars created out of thin air, they deliver the message with fecal flair, using metaphors like, “free money is like a unicorn that leaves trails of tasty chocolate droppings wherever it goes.”

But they’re also taking on a serious (and to my mind dangerous) narrative that’s being promulgated by scores of economists, journalists and others, who are working hard to build the case that, like Colonel Jessup in A Few Good Men, Chairman Bernanke was the brave warrior we all needed, the one who’s policies (however distasteful) ultimately protected us all from greater harm.

“It’s a fascinating read with plenty of sound analysis behind it.”

Mauldin and Tepper do an excellent job of denying this narrative by pointing out that the Fed’s “unconventional” (or Code Red) policies “worked” not by improving the economic well being of the masses but by massively enriching those at the very top. Low, and sometimes negative, real rates chased investors into riskier assets in the hope that a rising bubble would lift all boats. It didn’t. Wealthy asset holders are wealthier than before, but the gains haven’t trickled down to everyone else as Bernanke hoped. Instead, the Fed’s policies widened the already gaping divide between the very well off and everyone else.

The hardest hit? Savers. “[T]hese unconventional policies are generally good for big banks, governments and borrowers, but they are very bad for savers.” The problem, the authors maintain, is that Code Red policies have taken away the free lunch, risk-free return that savers used to be able to count on when buying government bonds. This is considered an unjust form of “financial repression” that’s devastating for those who rely on interest income to build their net egg. “Try retiring at 60 at today’s interest rates,” they lament. “We live in a world where it’s no longer necessary for the market to decide short rates or long rates.”

The “financial repression” argument is a popular one, but it can also be misleading. The story generally runs as follows: If it weren’t for the Fed meddling around to keep interest rates artificially low, markets would be delivering a more “normal” rate of return. The truth, which I suspect Mauldin and Tepper know, is that in the absence of Fed intervention – either paying positive rates on overnight reserve balances or draining a sufficient quantity of excess reserves by selling bonds – the market rate (i.e. federal funds rate) would almost always sit at zero. Indeed, one might say that the natural rate of interest is zero and that whenever rates are positive, it’s because the central bank is keeping them artificially high. So it isn’t so much that the Fed’s low interest rate policy is punishing savers but that it isn’t supporting a risk-free lunch the way it used to. We may not like it, but it’s difficult to justify the outrage. After all, none of us is entitled to generous risk-free returns.

The bigger problem for savers, though, is the long-run damage that Mauldin and Tepper anticipate as a result of the widespread adoption of Code Red policies. And that’s what the book is really about. How should investors prepare for a world in which currency wars, speculative bubbles, debt crises and punishing inflation become the norm?

It’s a fascinating read with plenty of sound analysis behind it. However, it misses the mark on two important fronts. First, there’s an unwarranted obsession with the Fed’s balance sheet. Thus, while it’s true that QE flooded the banking system with excess reserves, there’s no reason for investors to anticipate higher inflation as a consequence. Here, Mauldin and Tepper fall prey to two flawed textbook theories: the deposit multiplier and the Quantity Theory of Money. For them, reserves are “potential money,” and it’s only a matter of time before banks suddenly start lending them out, causing the broad money supply to explode and inflation to take off.

Anyone relying on these textbook theories to reason through the implications of QE is almost certainly going to get things wrong. Banks don’t lend reserves (except to one another in the overnight market). Having reserves doesn’t make it more likely that a bank will lend, and not having reserves doesn’t make lending less likely. Banks are capital constrained, not reserve constrained, and inflation does not simply increase pari passu with increases in the monetary base.

As Martin Wolf wrote in a recent Financial Times column, “Fear of hyperinflation is based on a mechanistic model of the links between central bank reserves and bank lending, which is irrelevant to contemporary banking. Banks are constrained not by reserves but by their perception of the risks and rewards of additional lending.”

The other big argument that falls partially flat surrounds the issue of debt. Picking up on the theme from their prior book, Endgame, Mauldin and Tepper warn of a debt-burdened world in which the unwinding of some Code Red policies will place additional strain on government finances, increasing the potential for default. What would happen, they ask, if the central bank were to stop buying government bonds and markets refused to pick up the slack on reasonable terms?

The U.S. government is likened to a household that must find a way to “live within its means,” and Greece is held out as an example of what might eventually happen to the U.S. or Japan. And while we’ve all heard this kind of thing from politicians and media pundits, investors must be careful to distinguish shrewd rhetoric from prudent insight. Mauldin and Tepper must know that there is zero risk of a Greek-style default by the Japanese or U.S. government. To understand why, simply consider the following quote, which opens the first chapter of Code Red:

“[T]he U.S. government has a technology called a printing press (or today its electronic equivalent) that allows it to produce as many U.S. dollars as it wishes.”

A household cannot do that, and neither can Greece. Actually, Greece could do it, when it still had the drachma and its own central bank, but it no longer can, and that’s the fundamental difference between the solvency risk of a currency user (like Greece) and a currency issuer (like the U.S., Japan or the U.K.). The former really can encounter payment problems, but a country like the U.S. or Japan can always pay its bills. So it’s wrong to say, “Japan will soon find it impossible to pay back its Godzilla-sized debt or even service the interest payments on it” or to chortle, “Somewhere, Charles Ponzi is smiling.”

My own view is that we aren’t going to see rising inflation because banks start lending out all those reserves, and I don’t think bond markets will go on strike, forcing rates to spike and governments like the U.S. or Japan to default on their debt. But that doesn’t mean inflation will remain low or that the Fed won’t eventually raise rates nor does it mean that the Code Red policies of the past won’t have unintended consequences that may wreak havoc in the future. Re-leveraging, speculation, bubbles, and more could, as Code Red warns, pave the way for recurring and intensifying crises. Mauldin and Tepper close out the book with sage advice for any investor who must navigate what will almost certainly be a turbulent road ahead. i

About the Reviewer
Stephanie Kelton, Ph.D. is Associate Professor and Chair of the Department of Economics at the University of Missouri-Kansas City. You can follow her blog at stephaniekelton.com