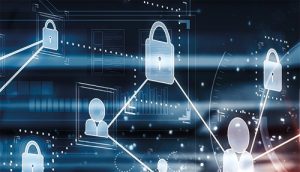 [1]Blockchain is playing its part in the unfolding Fourth Industrial Revolution.But this key technology – that powers and sustains Bitcoin – has yet to gain a solid foothold outside the cryptocurrency domain. The technology’s revolutionary powers and impact have been praised to such a degree that it is difficult to separate the hype from the vision. And the facts.

Blockchain is not magic stardust to be sprinkled on any challenge, but blockchain has demonstrated its effectiveness as an enabling technology beyond the scope of cryptocurrencies. The hype may yet approach reality, as blockchain is combined with other Fourth Industrial Revolution technologies – artificial intelligence, quantum- and edge-computing, and the Internet-of-Things (see Ian Fletcher’s article in the Summer 2018 issue of CFI.co[2]).

Blockchain could be defined as a distributed ledger of transactions between two parties recorded in a way that ensures data integrity, and is resistant to modification – a process that is enforced by every node in a decentralised network (Fig. 1).

Blockchain technology gathers, orders, and fits data into blocks, then strings these together in a process that is secured by cryptography. Each transaction is stored in a block of data with a hash – a string of characters generated in real time to serve as a unique stamp, and a way to transform data to a uniform, fixed size.

“Blockchain has demonstrated its effectiveness as an enabling technology beyond the scope of cryptocurrencies.”

These hashes are cryptographically produced, making the blockchain virtually impervious to tampering. As the information is sequential and time-stamped, duplicate entries are not possible (Fig. 1). 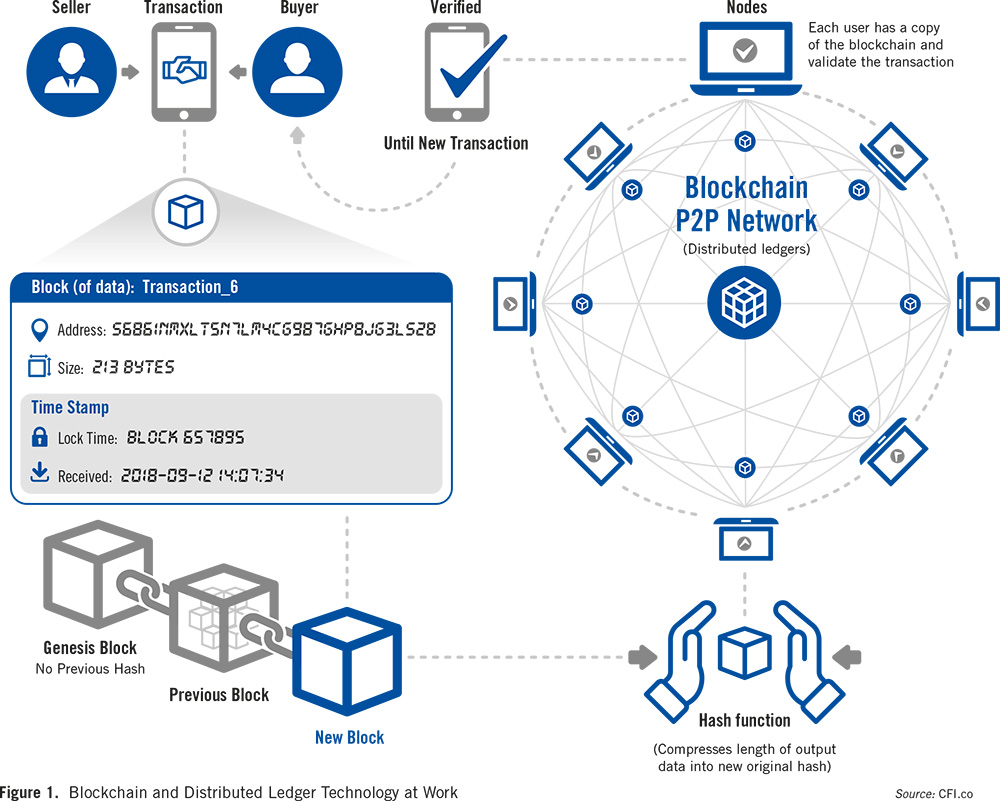 After two parties agree to undertake a transaction, information specific to the deal is digitally signed and broadcast to every other user node in the network. Once these nodes have checked the information and deemed it legitimate, the transaction is confirmed, and each node updates its copy of the blockchain accordingly. The block is then data-packed with other chronologically ordered transactions and, once all have been connected and timestamped, a blockchain is formed (Fig.1).

The history of blockchain can be split into five distinct phases – the last of which is still to play out (Fig. 2).

It all started with some theoretical work in the early 1990s (phase 1). Blockchain proper was invented by Satoshi Nakatomo in 2008 (phase 2). He followed-up his findings the next year by using blockchain as the cornerstone of Bitcoin. Interest in blockchain only really exploded in 2015 (phase 3) when the technology had become generally accepted, and mainstream.

Since then, blockchain has been all about deploying the technology and adapting it to the requirements of different industries (phase 4). Large global corporates, including banks, have now entered this new space looking for value-creation through enterprise-grade commercial applications (phase 5).

Even modestly sized companies have asked: How can we use this new digital technology to improve our business? The answer stretches across a broad spectrum.

Blockchain technology can be used in multiple paperless ways to improve efficiency and security, as well as simplify transactions and cut-out intermediaries (Fig. 3).

CB Insights, a purveyor of market intelligence to companies, identifies some 42 sectors and industries that blockchain could help to transform. 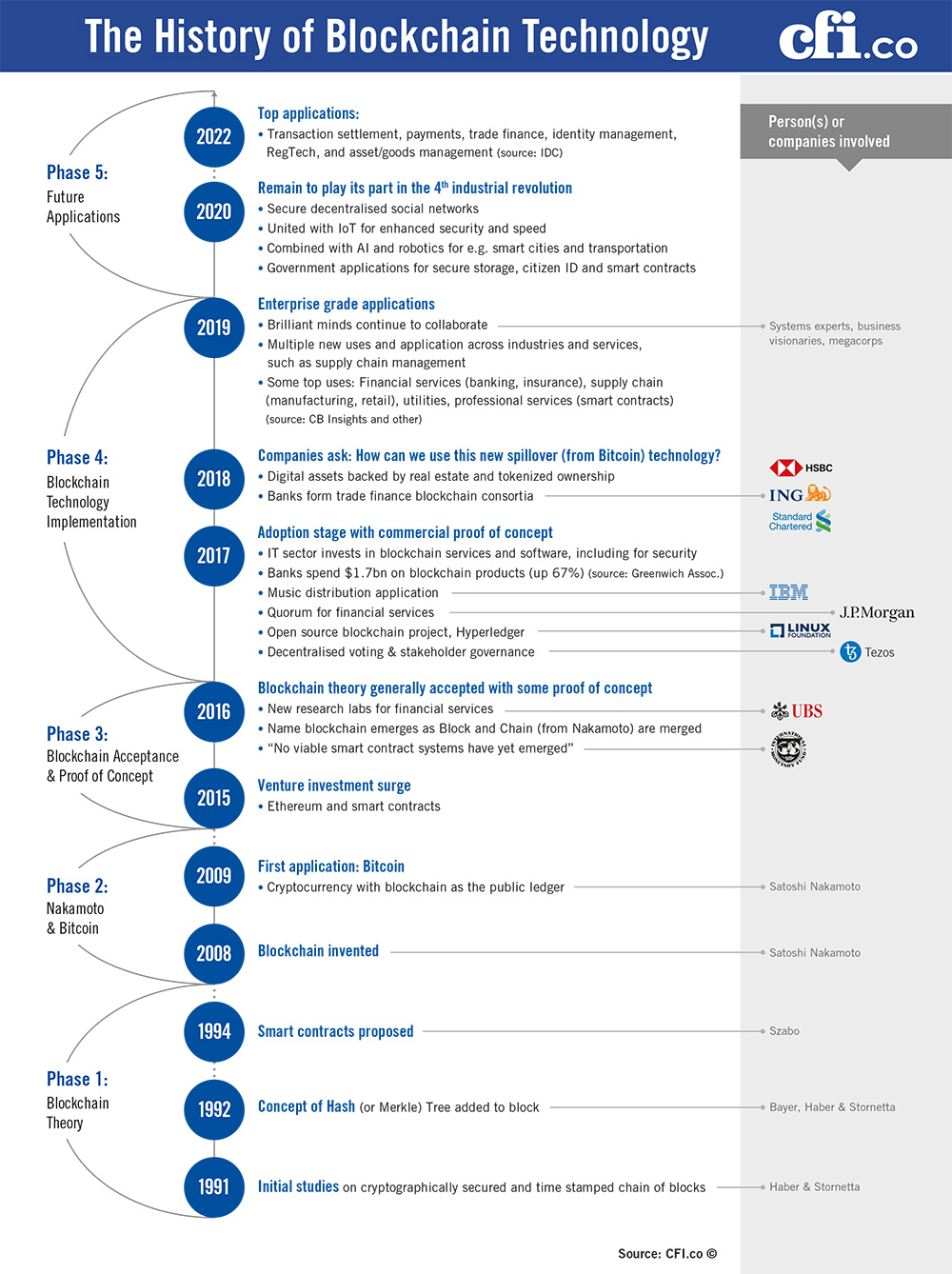 Waiting for the Killer App

There may not be a single killer application for blockchain yet – other than, perhaps, cryptocurrencies.

According to Vitalik Buterin, co-founder of Ethereum cryptocurrency, there is unlikely to ever be a “killer app” for blockchain technology. “The reason for this may be found in the doctrine of low-hanging fruit,” he says. “If there existed some particular application for which blockchain technology is massively superior to anything else, then people would be loudly talking about it already. And so far, there has been no single application that anyone has come up with that has seriously stood out to dominate everything else on the horizon.”

Most banks are currently facing the 3C conundrum (see my article on Reg-Tech in the previous issue of CFI.co): How simultaneously to reconcile compliance with multiple new regulations – with the need to cut costs and improve customer service.

Key advantages include operational efficiencies, cost-effectiveness, traceability, transparency, and accountability. These partnerships can also cut down on compliance costs, as they are fully scalable across the globe.

To this new technology – which favours the rapid progress of agile players such as, say, FinTech start-ups – this is important when considering the disadvantages of the millstone of legacy systems around major banks’ necks.

Playing to Its Strengths

The advantages of blockchain are plenty and easily identifiable:

Here are a few of the many promising applications of blockchain technology as the Fourth Industrial Revolution takes shape:

Just as the claim that encryption can resist new quantum computer power, the myth of immutability of the blockchain can be hard to accept. Surely, no technology can be 100% secure…

An efficient and direct blockchain, cutting out the middle man, could lead to lack of accountability and less transparency – with some actors missing out on value-added services and requiring human knowledge and assistance. 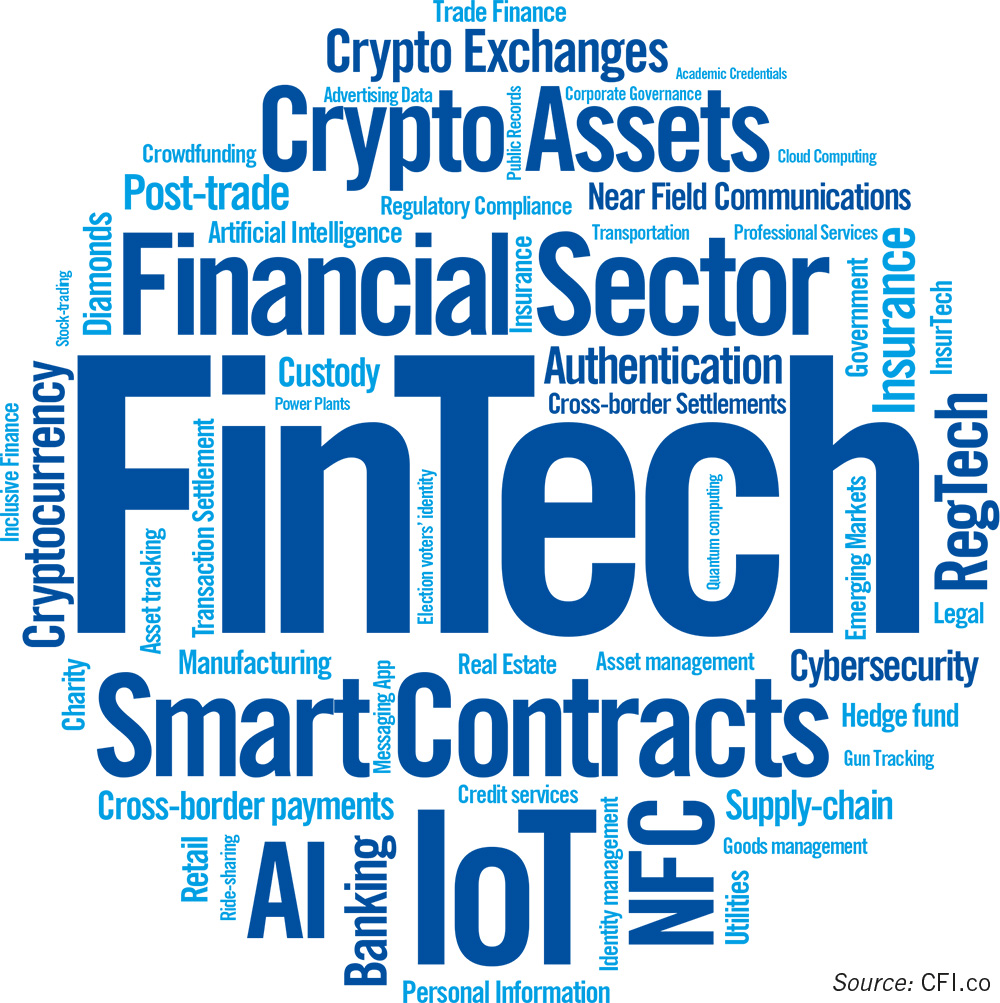 The optimism that blockchain will revolutionise business in general, and the financial services industry in particular, could merely be a reflection of an intense desire to change a global financial and monetary system deemed unfair by some. The way in which banks operate and the increased inequality, fuelled by successive asset bubbles inflated by quantitative easing, are cause for concern. The hope for a more inclusive, equitable, and egalitarian society, as well as for a fairer, decentralised form of governance, has inspired many to consider blockchain an agent of change.

And while mankind continues to yearn for new technologies to cure its many ills, it has so far failed to find any that fit the bill. The internet and the mobile phone have been transformative, but the societal impact of the humble washing machine has been more measurable – at least according to Cambridge economist Ha-Joon Chang, who regularly cautions against too much optimism on determining the transformative potential of new technologies.

Blockchain, though useful in many ways, including those that cannot yet be foreseen, is no doubt a game-changer for some. To others, it will end up being a disappointment. What to do if blockchain gets it wrong? Is it uncrackable, or hackable? There surely be no such thing. So, if the computer says no, where to turn to for a human override to stop your assets from becoming trapped in virtual reality…

Tor Svensson is the Chairman of Capital Finance International.