US Trade Policy: End of the Liberal World Order 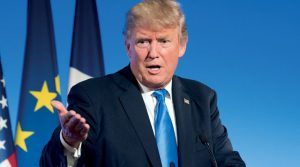 The established wisdom, first formulated and then imposed by the United States, says that trade encourages nations to maintain peace. In the decades following the end of World War 2, the US erected a new world order based on the premise that cross border trade creates common interests which conspires against the outbreak of hostilities and gently push nations towards cooperation.

Trade opened China to the world. The promise of trade also helped the countries of Eastern Europe break free of Moscow’s orbit. Trade can reconcile old foes such as when it allowed the US and Vietnam to forgive and forget their senseless war.

Losing sight of the bigger picture for want of historical insight, President Donald Trump is about to celebrate in grand style the reopening of four blast furnaces in the rustbelt states of the Midwest. The party may signal the start of a trade war.
United States Steel Corporation announced it will resume production at Granite City Works, idled in January 2016, as the company expects a significant boost in demand following the administration’s snap decision to slap a 25% tariff on imported steel – and 10% on imported aluminium. The pickle line, cold mill, and hot strip mill at the Illinois plant are being sped up as well to accommodate the anticipated rush of new orders. US Steel said it plans to rehire up to 500 workers previously laid off.
Mexican-owned Republic Steel is also ready to recommission two of the four blast furnaces at its Lorain (OH) mill, shuttered early 2016, creating around a thousand jobs and adding up to two million tonnes of pig iron to its output. Washington is ecstatic at the news from Illinois and Ohio.
Though president Trump exempted NAFTA trading partners Canada and Mexico from the new tariffs on steel and aluminium imports, he warned both countries to address US concerns during the renegotiation of the free trade agreement currently underway. Additional exemptions may be granted to other trading partners that toe Washington’s line.
Turning his ire to China, President Trump demanded the government in Beijing draw up a plan to shrink its bilateral trade surplus by $100 billion. Chinese Commerce Minister Zhong Shan coyly suggested an easing of restrictions on the sale of high-tech and military goods as a quick way of bridging the gap.

Whilst expressing a willingness to cooperate with the Americans, Chinese trade envoy Liu He protested that the US trade deficit cannot be cut by fiat: “That is not a market-oriented way of conducting business.” China has been vexed by the sudden ascendancy of trade policy maverick Peter Navarro (68), a left-wing economist and long-time critic of free trade.
Prof Navarro was reportedly invited to join the Trump Administration soon after the president’s son-in-law and senior advisor Jared Kushner, tasked with investigating China’s trade practices, turned to Amazon for inspiration. Here, Mr Kushner found and ordered Death by China: Confronting the Dragon – A Global Call to Action. The book, co-written by the professor, received moderate praise as a welcome wake-up call despite its xenophobic tone and tiresome hyperbole.
The New York Times deplored Prof Navarro’s “inflammatory language, cheesy graphics, and lack of solutions which undercut and invalidate an otherwise important argument.”
Formerly a bit-player in the Trump White House, Prof Navarro shot to the top and now has the president’s full attention – for however long that lasts. His luck changed days after the departure of former Goldman Sachs president and chief operating officer Gary Cohn who resigned as chief economic advisor over the decision to impose tariffs on imported steel and aluminium. Prof Navarro is now tipped as Mr Cohn’s successor even as Vice-President Mike Pence and Treasury Secretary Steve Mnuchin in private voiced their misgivings over his unorthodox approach. However, President Trump sees in the professor a kindred spirit if not a political soulmate.
The president’s new best friend is not known to follow convention or heed the unwritten rules of diplomatic protocol. Prof Navarro has repeatedly railed against China, calling the country’s currency manipulations and import restrictions the greatest threat to US national Security in living memory. He also accuses Beijing of deploying “weapons of job destruction” in its quest to become the world’s sole superpower.
In his book, Prof Navarro details a few outlandish notions that take him well into crackpot territory. In one of the more remarkable passages, the professor cautions against the use of mobile phones assembled in China as these devices may contain explosives that conceivably can be triggered remotely and instantly kill millions of unsuspecting users.

It is this man who convinced the US president to impose punitive tariffs on steel and aluminium, invoking threats to national security, and possibly unleashing the dogs of a global trade war. The measure is but a first warning shot with a sustained barrage to follow in case recalcitrant trading partners fail to take heed. The Trump Administration, with prof Navarro as its trade whisperer, is determined to bend the World Trade Organization (WTO) to its will and tilt the global playing field to favour US exporters.
Though a number of countries, including Canada, have already initiated proceedings against the US at the WTO – with many more mulling the same course of action – big players such as China and the European Union are unwilling to wait for the outcome of lengthy arbitration consultations.
EU Trade Commissioner Cecilia Malmström did not mince her words when she met US Trade Representative Robert Lighthizer in Brussels and demanded European steel mills be exempted from the tariffs. Earlier, Commission President Jean-Claude Juncker had already jokingly suggested to slap retaliatory duties on Harley Davidson bikes, Levi’s jeans and bourbon.
Whilst “frank exploratory talks” were taking place in Brussels, President Trump stoked the fires with a tweeted attempt at sarcasm accusing the “wonderful countries” of the European Union of treating the US “very badly” with “horrific barriers” to US exports. The president went on to promise additional taxes on “cars, etc.” in case the Europe Union fails to meet his demands.
Brussels is keenly aware that the US Administration’s anger is directed as much at the European Union as it is at China. Professor Navarro considers Germany nothing less than China’s European twin – to peas in a pot. The EU also realises that the perceived threat to US national security from imported steel and aluminium is but a legal fig leaf. Though the World Trade Organization allows the imposition of additional tariffs and/or quotas over national security concerns, it usually rejects such barriers when challenged.
In 2002, the European Union lodged, and won, an appeal with the WTO over US moves to introduce a 30% surcharge on imported steel. After the Bush Administration went ahead anyway, the EU retaliated with a series of compensatory tariffs targeted at goods produced in congressional swing states, sowing considerable political discord and causing President George W Bush to fall out with his brother Jeff Bush, then governor of Florida, over the hurt caused orange growers who were shut out of European markets.

Union to Strike Back

Instead of asking for exemptions, Mrs Malmström merely reminded Mr Lighthizer of the EU’s disappointment and, crucially, of the union’s ability to strike back. The trade commissioner also suggested the US Administration read up on history, alluding to the 2002 trade conflict. She left little room for doubt that the EU will swiftly respond to any protectionist measure adopted in the US. For good measure, commission president Jean-Claude Juncker added: “We also can do stupid.”
Mr Juncker was not far off the mark. The US imports mostly specialised steel from the EU that can no longer be produced domestically. Thus, the new tariffs hurt US manufacturers who are unable to source their steel elsewhere and must absorb – or pass on – the higher cost, losing competitiveness in the process. US canneries are almost entirely dependent on packaging steel produced by Tata Steel in The Netherlands. The food processing sector, one of the few US export success stories and already struggling with the slimmest of margins, fears it may lose hard-won market share as a result.
Moreover, of the eleven integrated steel mills in the US, four of the largest are fully- or part-owned by foreign corporations, including ArcelorMittal of Luxembourg, the world’s largest steelmaker, and Kawasaki Steel of Japan. A large portion of the 112 specialty mills in the US is also foreign-owned. Any revival of the US steel industry stands to benefit non-US corporations as well.
Regardless of tariff walls, most American steel mills are beyond salvation – too old, already dismantled, or reduced to brown fields – and no investor is brave or dumb enough to consider building new steel works in the US on the back of protectionist legislation which may be withdrawn or amended at any time.
Whilst a few steelworkers may return to their old jobs, they’ll constitute but a tiny fraction of the approximately 320,000 or so who lost their jobs in the US steel industry since 1973 – when production attained its peak at 137 million metric tonnes. These blue-collar jobs will not come back. The world of The Deer Hunter is no more.
Automation – not free trade – is to blame. According to the American Iron and Steel Institute, labour productivity has increased fivefold since the late 1970s from an industry average of 10.1 man-hours per tonne of finished steel in 1978 to barely 1.9 man-hours in 2014 – the latest year for which reliable statistics are available.
These impressive gains in productivity coincided with the opening up of world markets, spurring competition, driving down prices, and increasing efficiencies. The re-imposition of tariffs may throw a lifeline to steel mills that didn’t quite manage to keep up with global dynamics but will not help them – or indeed US industry as a whole – regain their leading edge.

As the architect of today’s global trade structure retreats behind walls, others – perhaps less benign – get a chance to step in. Early 2017, President Xi Jinping of China presented himself at the World Economic Forum in Davos, Switzerland, as the new champion of global “free-ish” trade, tracing new silk roads on the world map and promising untold billions in investments to those countries willing to help shape the Chinese Century.
Now made into his country’s strongman and set to rule for life as the reincarnation of Chairman Mao, President Xi pays lip service to free trade as long as it suits China. Domestically, Xi Jinping is no less of a mercantilist than Donald Trump.
With Russia and China in the hands of dictators, and the US and UK governed by latter-day plutocracies, only Europe and Japan remain standing as outposts of the liberal world order. They must now prepare to live their finest hour.