Jerome Powell, Chair of the Federal Reserve: The End of Easy Money

It had to happen and it just did.

The untold joys of expansive monetary policy as the engine of growth in lean times are, of course, always of a temporary nature. As the global economy emerges with a vengeance from years of lacklustre growth, the need to keep interest rates at, or close to, zero has all but disappeared. Fiscal policy has returned to the fore as the main driver of events. 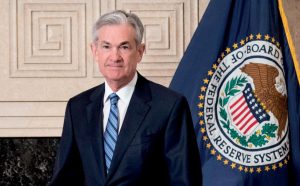 Most countries reacted quickly to the economic turnaround and busily set about clearing the debris accumulated during the Great Recession that kicked off with the 2008-9 banking crisis; paying down public debt and rebalancing spending deficits – echoing classic Keynesian thought. This is the path chosen by the more successful economies of Europe such as Germany, Sweden, Switzerland, and The Netherlands which now keep their national budgets firmly in the black. Member states of the Eurozone have reduced deficit spending, on average, to just 1.2% of GDP. Public debt, which ballooned during the banking crisis, is also shrinking remarkably fast.

In fact, the picture couldn’t possibly be rosier in places such as Germany. The country sees its economy grow at a healthy pace (2.9%) and reports an almost dizzying 7% expansion of industrial production. The German economy is nearing full employment and creates wealth as never before with a current account surplus equal to 7.8% of the country’s GDP – $291 billion in hard numbers – sparking the ire of President Trump in the US.
Others in Europe take a merry ride on the tailcoats of this Wirtschaftswunder 2.0: Spain, Portugal, France, Belgium, and Italy all saw their performance indicators snap into positive territory. Outside the Eurozone, things are quite peachy as well with Poland and the Czech Republic coming in at close to 5% GDP growth with balanced budgets and budding current account surpluses.
Admittedly, the Eurozone countries are still being pushed forward by the exceptionally generous policies of the European Central Bank which is reluctant to unwind its long-running bond buying programme that injected nearly €2.5 trillion into the economy over a three year period. ECB policymakers are discussing ways to wean the patient, now apparently fully recovered, off the meds. However, the bank will want to carefully manage rate expectations. With a trade war looming and ample room for growth in the labour market, the ECB is determined not to spoil the party.

“With its outsized current account deficit – now amounting to roughly $450 billion or 2.4% of GDP – the US needs its ‘kind strangers’ as much as the UK does.”

Chances are, that with Mr Trump in charge, cheap money will soon be but a faint memory. A saving grace, he does not need to bear all the blame for the predicament and may share that honour with a number of predecessors who also failed to address the structural and underlying issues that cause the US economy to remain stuck in its boom-and-bust cycles.