Political Order and Political Decay: From the Industrial Revolution to the Globalization of Democracy

“When the middle class constitutes only 20–30 percent of the population, it may side with antidemocratic forces because it fears the intentions of the large mass of poor people below it and the populist policies they may pursue.” 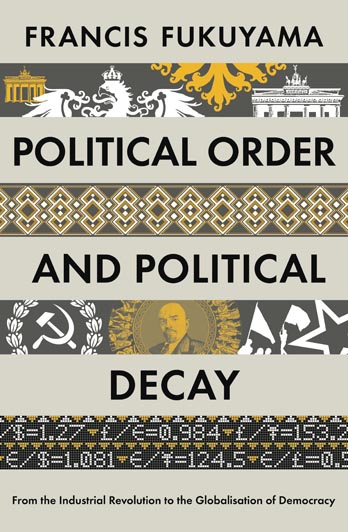 For Francis Fukuyama the ultimate goal of any given liberal democracy is “Getting to Denmark” – a metaphor for a nation-at-rest with a solid legal system in place, a body politic purged of extremism, a credible democracy, and a “dose of healthful end-of-history tedium.” As such, Denmark perhaps represents the closest humanity may expect to get to perfection.

Mr Fukuyama, a senior fellow at the Center on Democracy, Development and the Rule of Law at Stanford University, is best known for his ground-breaking The End of History and the Last Man (1992) – a tome in which he argues that, with the advent of Western liberal democracy, mankind may have reached the end of its sociocultural evolution.

Though Mr Fukuyama’s conclusion has repeatedly been tried by later developments, he did quite successfully demolish the classical Marxist expectation that an antagonistic world would inevitably lead to communism displacing capitalism.

Political Order and Political Decay is the second (and final) volume of what may well turn out to be Mr Fukuyama’s magnum opus. Together with the first instalment of his diptych – The Origins of Political Order: From Pre-Human Times to the French Revolution – Mr Fukuyama aims to explain how we reached the end of history. Notwithstanding the ambitious scope of the project, he does a rather admirable job of it.

The journey starts as humanoids descent onto the plains and organise in hunter-gatherer groups and ends – 1,200 plus pages later – in the present-day world. However, unlike biological evolution, the progress of humankind has an endpoint. The trouble is that while the world is trying to get to Denmark, it barely understands how the Danish arrived at their present state of national bliss. Thus attempts to impose liberal democracy on wayward countries such as Somalia, Libya, Afghanistan, and Haiti are destined for failure. The endpoint is known; the path to it remains shrouded in fog.

Though insightful and a tour-de-force of singular significance, the two-volume work by Mr Fukuyama does seem to ignore the more irrational motivators of political development such as national myths, identities, and enmities. These less tangible, but nonetheless very real, considerations oftentimes determine the attitudes and aspirations of entire nations that – as a result – seem wholly uninterested in pursuing the Danish model.

Still, Mr Fukuyama’s tomes are essential reading for anyone interested in understanding the course of human development and how the end of history will come about.