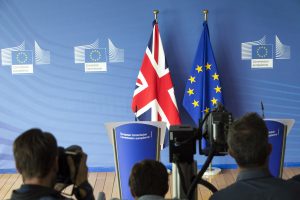 Eurosceptics often decry the European Union’s perceived democratic deficit and strenuously object to being ruled by “faceless unelected bureaucrats.” In the UK, where Euroscepticism is particularly fashionable, they wish for legislative powers to be devolved to Westminster and executive powers to Whitehall.

Interestingly, and tellingly, one of the first acts of Prime Minister Theresa May upon moving into Number 10 in the wake of the June 23, 2016, referendum was to deny parliament a say in the upcoming Brexit proceedings – a decision she had to revisit weeks later by order of the Supreme Court.

Eurosceptics are quite fond to voice their supreme distaste of the faceless unelected bureaucrats who rule their lives from Brussels, never once questioning the oxymoron contained in the allegation: no bureaucrat is ever elected to his post by the way of a popular vote.

The charge levelled against the EU for sustaining a democratic deficit stems mostly from a lack of familiarity with the, admittedly complicated, way the union was set up – or forged over the years as it grew from a friendly cabal of six nations traumatised by war in the late 1950s to a behemoth with 28 member states stretching from the North Cape to the Canary Island and from the far-flung Azores to the Black Sea.

Whereas initially the EU, in its former guises as the European Coal and Steel Community and the European Economic Community, was designed and set up to prevent the continental powers from unleashing another world war, the construct eventually became a tool for furthering democracy. In 1981, Greece was hurriedly absorbed into the community as a way to secure its fragile democracy, then under near-constant threat for the country’s unruly colonels. As both Portugal and Spain emerged from decades-long rule by dictators, both countries were quickly ushered in for the same purpose.

“Eurosceptics are quite fond to voice their supreme distaste of the faceless unelected bureaucrats who rule their lives from Brussels.”

The first, and most important, condition imposed on countries wishing to accede to EU membership is the existence of “stable institutions guaranteeing democracy, the rule of law, human rights, and respect for, and protection of, minorities.” As both Poland and Hungary discovered recently, any member state that is deemed to violate these democratic principles will immediately be called upon to rectify its behaviour. Such backsliding countries may be hauled before the European Court of Justice, receive sanctions, or – in extreme cases – see their membership suspended. Miscreants may eventually be expelled from the union altogether.

As a promoter of democracy and its associated values, the charge of the EU sustaining a democratic deficit is a particularly painful one for Brussels to suffer. The accusation relates primarily to the difficulty EU citizens perceive in their ability to relate to an outsized and distant entity that is seen, but rarely noted, to rule their lives.

The trouble is that the commission – which is responsible for the day-to-day government of the union – has the power to initiate legislation, which then needs to be approved by both council and parliament. The 750 members of the European Parliament (MEPs) are only allowed to discuss, amend, and vote on legislation proposed by the commission. Contrary to members of national parliaments, they do not have the right to table their own bills. However, the democratic deficit stemming from this limitation is, whilst regrettable, also negligible: in national parliaments across the EU fewer than 15% of legislative initiatives tabled by members make it into law.

Formerly a weak collective mostly home to politicians outmanoeuvred in their domestic arenas, the European Parliament has been significantly reinvigorated with the 2009 Treaty of Lisbon which established a co-decision procedure that mandates the approval of new legislation by both the European Council and the European Parliament. The co-decision procedure also awards parliament the right to inspect and vote on the EU’s budget – which, btw, is rigorously audited by independent external experts. These added powers have given the parliament, as the direct representative of EU citizens, a big stick for keeping the council – and the commission – in line.

Another novelty introduced with the Lisbon Treaty was the creation of a highly visible council president to act as the union’s leader. This has raised the profile of the council which is now the only forum where important decisions are made by the heads of government of all member states. The European Commission – mistakenly seen as almighty – has no voice in the council and is merely charged with carrying out its instructions – pending approval by parliament.

A union of 28 states that all value their often hard-fought sovereignty cannot function along the same lines as national governments which, by their very nature, enjoy full power. The EU can only be ever as powerful as its member states allow it to be. If the EU suffers a democratic deficit – a highly contentious notion to begin with – it results from the need to respect each member state’s sovereignty. As an added benefit, this also ensures the full transparency of the EU law-making process: each legislative initiative that makes it through the council and parliament needs, in turn, to be ratified by national parliaments.

Where the perceived democratic deficit may be most pressing is within the rather obscure confines of the Eurogroup – officially an informal annex to the Council of Ministers – which includes the nineteen ministers of finance of the Eurozone. The increasingly powerful Eurogroup works towards the establishment of a fiscal union and – at a later date – a European Ministry of Finance with far-reaching powers to keep profligate spending in check. So far, the Eurogroup has not been subject to parliamentary scrutiny.

A number of ideas have been floated to remedy this situation, including a suggestion to restructure the European Parliament in such a way that only members from Eurozone countries would be elected by popular vote. Under this plan, MEPs from non-euro member states would be nominated by their national parliaments, much as all MEPs were before European elections were introduced in 1979.

The idea would help to further rationalise EU spending patterns and represents a possible next step towards a true European Federation. It requires, however, a modicum of faith in the intentions of the union and those of its members. Though most will not say it out loud in order not to antagonise those of a more sceptical disposition, nearly all EU member states subscribe to the preamble of the 1957 Treaty of Rome – the foundational document of the EU – which details the ultimate objective of the exercise: “To lay the foundations of an ever closer union among the peoples of Europe, [resolved] to ensure the economic and social progress of their countries by common action to eliminate the barriers which divide Europe […].”

The 1957 treaty – including its preamble – has been ratified six times since then, also by the UK which – again interestingly and tellingly – in 2014 secured an opt-out of the “ever closer union” bit. It seems there was just no way to satisfy British Eurosceptics. Lacking a firm, or even tentative, belief in the value of the project, any excuse – including something as vague as a democratic deficit – constitutes grounds for its dismissal.