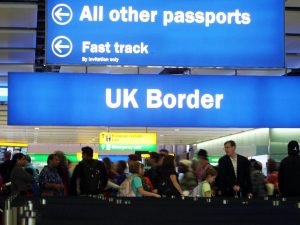 Post-Brexit, the UK will remain part of the EU customs union and quite possibly of its single market as well. That is the gist of the tentative agreement reached on December 08 in Brussels between both parties. The UK’s continued membership of the customs union was spelled out in the form of an apparently iron-clad guarantee that Ireland will have no hard border. The reintroduction of checks along the almost 500km-long border separating the Republic of Ireland and Northern Ireland – the six counties that in 1922 choose not to join the Irish Free State and keep their allegiance to the crown – runs counter to the terms of the 1998 Good Friday Agreement which put an end to the sectarian violence in the province.

The emergence of a post-Brexit hard border would risk a return to the dark days of The Troubles. Though nobody – not the government of the Republic of Ireland, nor the EU or, indeed, Her Majesty’s Government – wants to seal off the border or erect any kind of barrier no matter how unobtrusive, the UK’s declared intention to exit the European Union mandates some form of control, not so much of people as of merchandise. After the UK’s departure from the union, the now invisible line dividing Eire becomes an EU external border.

Brexit supporters – and particularly those who favour a no-deal split followed by trade on WTO (World Trade Organization) terms – fail to understand the implications of their stance: no border in Northern Ireland precludes the UK from obtaining its WTO schedules (lists) – the non-discriminatory terms of trade negotiated with, and examined by, the organisation’s members. The important bit concerns the non-discriminatory nature of WTO schedules: the terms of trade need to be equal for all members.

“Switzerland is a special case: it remains outside the EU and the customs union whilst it participates partially in the single market – adhering to its four fundamental freedoms, including the freedom of movement of persons.”

This crucial principle, also known as most-favoured nation (MFN) status, is spelled out in Article 1 of the General Agreement on Tariffs and Trade (GATT) which governs the trade in goods – it forms the very foundation on which the global regime of cross border trade was erected.

Preferential terms of trade are only available on the basis of bilateral or multilateral free trade agreements (FTAs). Even so, border controls remain in place to check for compliance. The only way to reduce invasive checks is for two or more countries to join in a customs union, adopting a single external tariff structure. A single market goes a few steps further by aligning regulation and eliminating non-tariff barriers to trade. Only this completely eliminates the need for border controls.

Absent a border in Northern Ireland, the UK effectively states – as far as the WTO is concerned – that it is open for business to all and will not inspect, control, or tax any of its imports at any of its border crossings. Thus, the country would declare itself the only true free trade nation in the world – a highly impractical proposition that would run afoul of countless international (judicial) treaties, becoming an outlaw country in the process.

Whilst this may be good news to the cocaine producers of Colombia and the XTC pill pushers of The Netherlands, it would also place the UK an impossible position: unilaterally declared terms of trade need not be reciprocated. In other words, the UK blindly accepts whatever the world dumps on it without British exporters enjoying the same freedom when they venture into other markets.

Simply put: no border in Northern Ireland means no border anywhere in the UK. The declaration signed in Brussels between Prime Minister Theresa May and President Jean-Claude Juncker of the European Commission clearly – and, for all its precise diplomatic language, unequivocally – states that the Irish border will remain invisible. The only logical conclusion from this is that the UK will remain part of the EU’s customs union and single market.Whilst Norway is not a member of the European Union, nor of the customs union, the country is part of the single market and accepts the EU’s four freedoms. As a result, the country’s almost 1,700km-long border with EU member Sweden looks open, but is not. In 2016, almost 230,000 vehicles were checked by customs agents on both sides of the border looking mostly for bootleggers.

Turkey is, of course, not an EU member, nor does the country participate in the single market. It is, however, in a customs union with the EU. Even so, the flow of trade is subjected to rigorous inspection when moving to or from the union.

Switzerland is a special case: it remains outside the EU and the customs union whilst it participates partially in the single market – adhering to its four fundamental freedoms, including the freedom of movement of persons. Switzerland cemented its relations with the EU in over 210 treaties which, taken together, apply most of EU law to the country. To prevent the Swiss from applying EU law selectively (picking and choosing), all treaties contain a guillotine clause which states that the a breach of any single treaty invalidates the lot of them.

A truly transparent border in Ireland necessitates continued UK membership of both the customs union (to ensure tariff parity) and the single market (to ensure regulatory alignment). A special – and undoubtedly complicated – Swiss-type deal may be called for: one that places the UK outside the EU, as per its explicit request, but leaves all else unchanged – including the freedom of movement disliked by most Brexiters. The Swiss tried to wriggle out of that in 2014 but were reminded by Brussels of the guillotine clause. Hereupon the Swiss government immediately ceased all further attempts at discouraging EU nationals from claiming their right of abode.