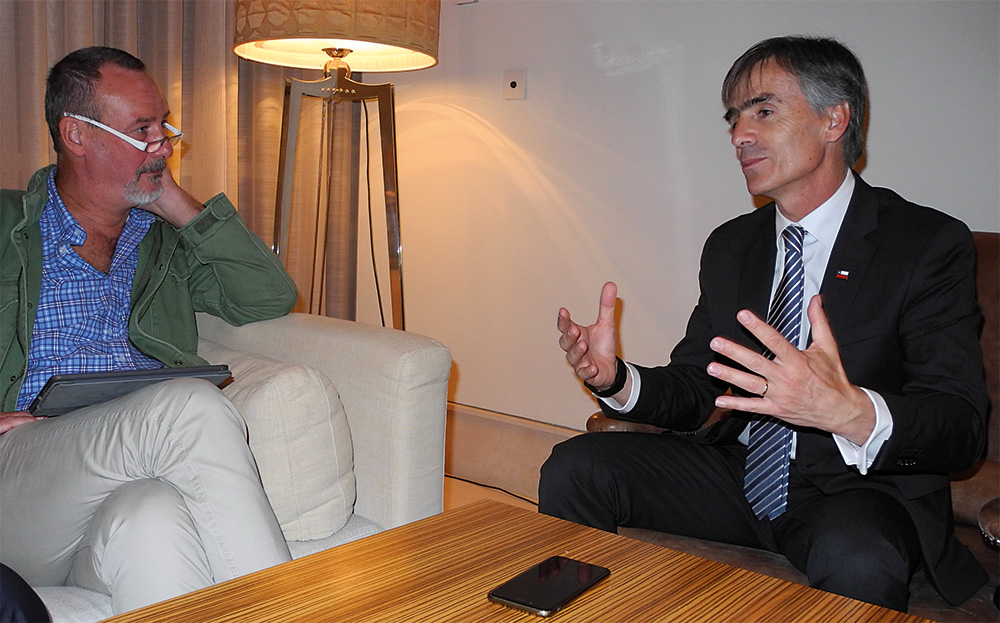 It lavished praise on the country for its willingness to embrace the structural reforms with which the administration of Chilean President Sebastián Piñera aims to push the nation into the ranks of the world’s most advanced economies. Piñera has repeatedly vowed to transform Chile into Latin America’s first fully developed market.

To achieve that status, Chile needs to boost productivity. In its latest statement on the country, the IMF suggests that some innovation, and a rewriting of Chile’s rigid labour laws, could go a long way.

“We sincerely think that a closely integrated world equates to a better world.”

Meeting with CFI.co at the recent World Investment Forum in Geneva, Chile’s Economy, Development and Tourism Minister, José Ramón Valente, explained that history offers a valuable lesson to countries such as his to avoid the dreaded “middle-income trap”.

“Empirical evidence tells me that in order to break out of this trap, societies first need to reach a political consensus around a suitable development model,” he said. “In other words, a national sense of purpose seems to be a requirement to avoid getting stuck in the swelling ranks of middle-income countries.”

Steady as She Goes…

For the last 20 years or so, Chile has maintained a uniform and predictable set of economic policies supported by the twin pillars of open borders and light-touch regulation. On the Economic Freedom Index, compiled annually by the Heritage Foundation, the country claims a spot within striking distance of the US and the Netherlands – and eons removed from its Latin American peers, with Brazil and Argentina scraping by as “mostly unfree” economies near the bottom of the global league. On the World Economic Forum’s Global Competitiveness Index, Chile again leads the continent, ranking alongside Spain, and significantly ahead of Italy and Portugal.

If these lists prove anything, it is that Chile already has all the outward signs of an advanced economy. But Valente cautions that an economic environment that fosters growth and spurs development consists of a fragile and easily disturbed balance of interests and policies. He points to Venezuela to make his point: “When the political consensus breaks down, as happened in Venezuela, any gains made may be quickly lost.

“Look, quite a few countries in the region have enjoyed their 30 years of national glory. Argentina enjoyed its ‘glorious 30’ towards the end of the 19th Century. Brazil looked unstoppable as the up-and-coming industrial powerhouse of the world in the 1960s and 1970s. Half a century ago, Venezuela was an almost fully developed country.”

Chile, Valente says, enjoyed its glorious 30 between 1985 and 2012, and wavered a bit in the years that followed, discussing myriad ways – some sensible, others less so – to “rebase” its development model.

While welcoming debate, Valente is worried that changes to a winning team may not guarantee better results. “Late last year, Chilean voters reaffirmed their commitment to the development model that has yielded stellar results since 1985. That’s why I disagree with The Economist and remain convinced that our country can, and will, escape the middle-income trap.”

In an article published in September, The Economist hailed the return of billionaire businessman Sebastián Piñera as president, but the magazine’s editors worried that he may not find his groove. Facing a sceptical congress, the president is encountering resistance to his ambitious reform programme which aims to turn back the clock on the rigid and confusing corporate tax code introduced by his predecessor to raise education funds, but which has instead angered small businessowners and scared-off investors.

“Our job is to defeat pessimism with action,” said Valente, emphasising that to push GDP growth to 4% or higher, productivity and investment levels need to increase: “Hence, we must preserve the political consensus, and reconnect with our success formula, to push the economy and latch on to the Fourth Industrial Revolution that is taking shape.” Valente is adamant that some of the more bearish analysts miss the point. “A few outside observers are still stuck on the refrain that Chile’s economy represents a rather simplistic edifice, erected on the abundance of natural resources.

“Just a quick look at the country’s export mix and corporate matrix is enough to expose the fallacy of this argument. Chile has been the birthplace of large multinational companies. The country gave rise to the largest airline company in Latin America [LATAM Airlines], the largest retailer of the region [Falabella], and the second-largest grocery store network on the continent [Cencosud]. Moreover, Chilean wineries and fruit packers serve global markets, as do its fisheries.”

To Valente, these corporates offer tangible proof that Chile’s economy has successfully diversified from commodities, with mining representing just 10% of its GDP, which “implies a highly complex economy and one that is able to thrive in a competitive environment”. Valente notes that Chilean exporters have managed to challenge incumbents in a number of major markets. “Farmed salmon and wine are prime examples of this,” he says. “We started from close to zero and are now home to some of the most competitive companies in these sectors. There is absolutely no reason why these remarkable feats cannot be repeated going forwards.”

A significant degree of Chile’s corporate savvy may be attributed to the country’s eagerness to seal international trade deals. No other country sustains more free-trade agreements than Chile. “Trade, however, is just one part of the equation,” says Valente. “It is just as important to have deals that allow companies to conduct business entirely outside their home market. Right now, Colombia and Peru receive significant investments from Chilean corporates which have turned away a little from Brazil and Argentina to look for perhaps more exciting opportunities elsewhere. One must not forget that Chile’s domestic market comprises only about 17 million consumers.”

Successful business soon outgrow the domestic market and must look abroad for expansion, he believes, and it is of paramount importance to have as many trade and investment deals as possible.

Valente explains that, at last count, Chile had 64 free-trade agreements in place, covering around 90% of global GDP: “We sincerely think that a closely integrated world equates to a better world. Chile is now determined to expand existing trade agreements to include frameworks that ensure regulatory equivalency. We want to move way beyond tariffs and take down other barriers to cross-border trade as well.”

Chile is currently revising its free-trade agreement with the EU in an attempt, welcomed by Brussels, to reduce or eliminate non-tariff obstructions. “Precisely because neither one of us is in any particular hurry, we have an opportunity to calmly analyse the present and come up with ways to harmonise regulation and promote frictionless trade,” he said. “Chile’s main advantage is that the country already now has its borders open to outside goods, services, and capital. After adhering to the same policies for well over 30 years, our credentials are well established. That stability has not gone unnoticed, and helps explain why Chile remains one of the most important recipients of foreign investment in Latin America.”

Late last January, World Bank chief economist Professor Paul Romer quit his job after questioning the downgrading of Chile’s ranking on the Ease Of Doing Business Index, which followed a revision of the criteria used to compile the annually updated list. Romer noted the country’s downward slide from 34th place in 2014 to 55th spot four years later, and attributed the fall to a former director of the World Bank Group. The director allegedly tinkered with the methodology to penalise the country for having elected left-wing president Michelle Bachelet for a second non-consecutive term in office in 2014.

In the firestorm that followed his formal apology to Chile for the “politically motivated” downgrading of its position on the index, Romer was encouraged to resign. A recipient of the 2018 Nobel Memorial Prize in Economic Sciences, Romer has since returned to the New York University Stern School of Business to teach and continue his research on the theory of endogenous growth, which he helped formulate. This theory examines the impact of domestic factors on economic development such as education, innovation, and policy elasticity (the ability to adapt to change circumstances).

Chile’s Minister of Economy, Development, and Tourism, José Ramón Valente, considers the Romer-episode closed. “This was mostly an internal World Bank matter,” he said. “As I understand it, Paul Romer criticised the changes in the methodology used to compile the Ease Of Doing Business Index and how these changes affected our country. However, even his own staff disagreed with his objections, and Paul Romer ended up quitting his job over the resulting controversy.

“Now, we fully understand that it is quite normal to revise and update the methodology used to calculate any given index. However, as this episode shows, it is quite important that any and all changes be debated openly and adopted in a transparent way. By the way, the World Economic Forum has also just updated it Global Competitiveness Index.

“The entire controversy has caused significant harm, not so much to Chile’s own reputation and standing, but to the World Bank’s own credibility.”