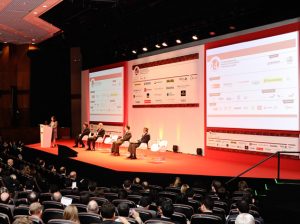 With this objective in mind, every two years, IBRI hosts Brazil Day, an international forum in which the country’s leading publicly listed companies present themselves in New York as investment opportunities for American investors.

In pursuit of the same objective, IBRI organizes Tarde de Brasil en Latibex (an Afternoon of Brazil on Latibex) jointly with the Madrid Stock Exchange in line with the principles of institute’s mission statement: stimulating and promoting exchange between Brazilian IR and capital markets’ professionals and the overseas markets. (Note: Latibex is a stock market for Latin American stocks; based in Madrid since 1999).

Capital markets in the Middle East and Asia are increasingly of interest to Brazilian companies.

The Brazilian IR profession has successfully penetrated new markets in addition to those that are already part of a permanent agenda such as the United States and Europe. Capital markets such as those in the Middle East and Asia are beginning to emerge on the list of countries of interest to Brazilian companies.

Improving and cultivating the relationship with analysts and investors internationally requires knowledge of specific of foreign culture and thus IR professionals with these skill sets are increasingly in demand.

The IR profession in Brazil is increasing their profile in society. An example hereof is the recent appointment an IR professional, Leonardo Pereira, to assume the Presidency of the Brazilian Securities and Exchange Commission (CVM).

IBRI intends to continue its important work of elevating the professional standards for the IR profession and of supporting the promotion of Brazilian companies overseas.

IBRI was founded on June 5, 1997 to enhance the role of Investor Relations professionals in the Brazilian capital markets and contribute to strengthening and improve the IR community.

IBRI’s philosophy of work includes raising the profile of partnerships with entities in the domestic and international markets which have common objectives in the IR area. In this context, IBRI believes that the partnerships which have been established have generated value for the members as well as contributed to enriching the technical discussions with official bodies – with which IBRI has signed agreements – such as the CVM (Brazilian Securities and Exchange Commission).