Jordan: The Sky Is the Limit 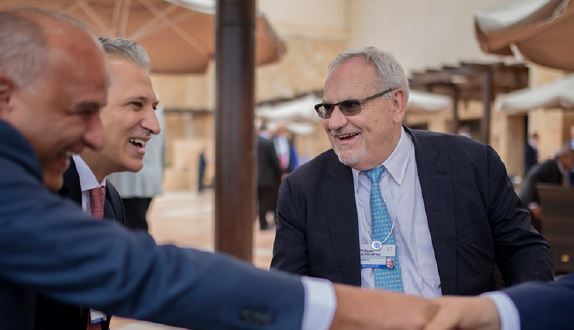 Built by the Ministry of Transport in the early 1980s as a replacement for the Amman Civil Airport, and government-owned and -managed, QAIA was designed to handle a maximum of 3.5 million passengers per year. By the mid-2000s the airport had outgrown its original specifications. An upgrade and expansion were called for, not only to handle heavier traffic flows, but also to preserve QAIA’s status as a niche transit hub for the region.

With limited resources and an economy still on the mend after suffering a steep downturn in the late 1980s, the Jordanian government in 1998 embarked on a large-scale privatisation drive, selling fourteen state-owned enterprises in an, ultimately successful, attempt to reduce debt and rebalance the books. From a high of 174% of GDP in 1989, government debt was slashed, in relative terms, by two-thirds in barely two decades. The gargantuan exercise, however, meant that no state funds could be earmarked for infrastructure development or renewal.

“With limited resources and an economy still on the mend after suffering a steep downturn in the late 1980s, the Jordanian government in 1998 embarked on a large-scale privatisation drive, selling fourteen state-owned enterprises in an, ultimately successful, attempt to reduce debt and rebalance the books.”

Mindful of the need not to delay the airport expansion, the Jordanian government in early 2006 appointed the IFC as lead advisor on the feasibility of a establishing a public-private partnership for the project. The IFC helped authorities organise, manage, and conclude a competitive tendering process based on a 25-year build-operate-transfer contract. In May 2007, the Airport International Group (AIG) – with participation, amongst others, of Aéroports de Paris Management, construction company Joannou & Paraskevaides, and regional investment companies – won the bid, offering the state a 54.% share of gross revenues and proposing to expand QAIA’s capacity to twelve million passengers per year.

Appointed as senior lender and lead arranger, the IFC worked with AIG to arrange long-term financing to closely match the projected cash-flow profile. The umbrella provided by the IFC significantly reduced the project’s political and commercial risk which, in turn, brought in $160m in loans from commercial banks to supplement the corporation’s own $120m and the $100m parallel loan it helped raise from the Islamic Development Bank.

The success of QAIA has led the Jordanian government to complete numerous other successful PPP projects in the power sector with the support of IFC.

During the construction of the new terminal, completed in 2013 after a number of design changes, Jordan’ economy proved remarkably resilient to unsettling externalities such as the onset in the Great Recession in 2009, the Gaza War in that same year, and the Arab Spring. GDP growth remained robust throughout whilst passenger numbers at QAIA significantly outpaced projections to reach 7.4 million last year. Two successfully concluded financing rounds delivered a modern airport with plenty room for growth and helping the government’s drive to attract more tourists to the country. Instead of representing a drain on scare public resources, QAIA actually adds to the state’s revenue.

The largest private sector investment project to date, Queen Alia International Airport showcases the power of public-private partnerships and the value of participation by the IFC. Rather than merely providing funding, the IFC mobilised its portfolio management team to engage lenders and speed up processes. A conduit located at the centre of a triangle formed between government, concessionaire, and lenders, the IFC effectively got the project off the ground by – as the saying goes – making things happen.