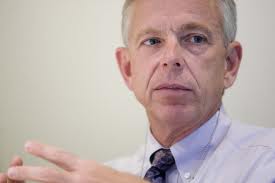 Big numbers don’t scare Lowell McAdam. The Verizon CEO, sitting atop the largest US telecom provider, in September raised almost effortlessly $47bn through a record-shattering bond issue. The funds enabled Verizon to eject British Vodafone from its wireless operator through an amicable buy-out.

The bond issue was timed close to perfection just as the US Federal Reserve hinted that it might tighten money supply and allow interest rates to rise. Although Verizon’s BBB+ Standard & Poor rating – just a tad into the investment grade realm – obliged the company toward some generosity, investors were quite content to subscribe at just two percentage points over 10-year treasury issues.

Under Mr McAdam, Verizon is doing quite well, if not exceedingly so: For the third consecutive quarter, both the company’s operating income and its earnings per share rose by double digits. Last month, Verizon reported a year-on-year jump in operating income of a whopping 30.0% to $7.1bn. Revenues improved 4.4% as well, underscoring a significant increase in profitability.

For Lowell McAdam these encouraging results are but the tangible consequences of inexorable innovation processes that now revolutionize lives and societies the world over. Mr McAdam is busy placing his company at the forefront of these exciting developments, belying the established creed that corporate behemoths are slow to adapt to changing circumstance in a fast-paced world.

“We are in a golden age of innovation. I am fortunate that my career has coincided with one of the most sweeping technological revolutions that any industry has ever seen.” Not merely a CEO obsessed with the next quarter’s numbers, Mr McAdam happily accepts that serious challenges remain in leveraging the power of the technological tools now available to transform societies: “Equipping biometric devices with wireless technology and cloud networking capabilities, we can shorten the distance between patients and doctors. That same cloud technology can also be used to design and operate smart grids that reduce energy consumption and lower emissions. The possibilities are well-nigh endless”

The Verizon CEO also notes that over 60% of the world’s population is still not connected to the Internet, 80% live on less than $10 a day and over a billion people cannot read a book or sign their name. “Our industry is uniquely positioned to help change that and much more. We can transform individual life in ways that would have seemed miraculous just a year or two ago.” Mr McAdam sees not only business opportunities aplenty, he stands out for recognizing his company’s wider responsibilities as well.