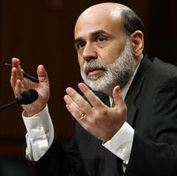 In May 22 testimony to the Joint Economic Committee of Congress, Fed Chairman Ben Bernanke issued another of many similar positive interpretations of central bank policy. Yet again, he continued to argue that quantitative easing has decreased long-term interest rates and produced other benefits. He called economic growth “moderate,” a term that he has often used without acknowledging that the Fed’s forecasts have repeatedly been far above the mark.

In spite of his continuing ebullience, the Fed’s polices have not produced the much-promised re-acceleration in economic growth. The 1.7% growth in 2012 was actually less than the 1.8% average rise in GDP in the thirteen years of this century, and less than half the 3.8% GDP growth rate since 1790. Only growth in the 1930s was less than in the 2000s, a time when Dr. Bernanke played a major, if not dominant, role in monetary policy decisions.

Questions abound: how serious have their forecast errors been? Are they related to the Fed’s failed policies? Has the Fed facilitated errant fiscal policies that are as much a problem as central bank policy? What may explain the Fed’s excessive optimism? Are they so committed to what they are doing that they continue to make unsupported assessments, or is the Fed relying on an outdated understanding of how the macro-economy works – one that does not square with an impressive body of new scholarly research?

“Questions abound: how serious have their forecast errors been?”

In its final forecast for 2011, made in late 2010, the Fed forecast that real GDP would rise 4% in 2011, and just prior to that projection they expected even stronger growth. For 2012, the Fed projected 3.3% growth, with previous assessments even higher. In both years, their forecasts were more than double the actual result. Augmenting horrendous forecasts, the Fed made overly optimistic economic assessments in the official minutes of the Fed Open Market Committee, as well as the Beige Book, that are very hard to reconcile with the poor economic outcome.

Four major defects in the Fed’s approach are all too evident. First, they continue to fail to take into account that economic growth slows considerably once gross government debt reaches 90-100% of GDP, and that this relationship may turn nonlinear above that threshold – i.e., that growth deteriorates more than proportionately as debt levels escalate. Second, high levels of private debt to GDP have a similarly debilitating effect. Third, the Fed has relied on a wealth effect that is either nonexistent or extremely weak. Fourth, all three quantitative easing (QE) operations have raised, not lowered, long-term Treasury bond yields, thus serving to keep the interest rate higher than it otherwise would be.

The short-run impact of these policies also transitorily raised inflation. Since wages remained soft, real income of the vast majority of American households fell. If the Fed had not taken such extraordinary steps, interest rates and inflation would be lower currently than they are, and we could have avoided the unknowable risks embodied in the Fed’s swelling balance sheet. In essence, the Fed has impeded the healing process, delayed a return to normal economic growth, and worsened the income/wealth divide while creating a new problem – how to “exit” its failed policies.

Four different scholarly studies, all published in just the past three years, document this conclusion. These studies are highly relevant. Since Organisation for Economic Co-operation and Development (OECD) figures indicate that gross government debt exceeds 100% in the US, Japan, and the OECD countries of Europe. Three of these studies have been published outside the United States and were primarily conducted by foreign scholars, and thus avoid domestic political biases. Here are the studies, starting with the one with the broadest implications:

This argument is also operative since private debt to GDP in the US was 260% of GDP in the fourth quarter of 2012. This is a serious matter, since it strikes at one of the primary purposes of central banking – to promote private credit. But when private debt levels are excessive, efforts to promote more private debt are counterproductive. Thus, the Fed is destabilizing rather than facilitating economic growth. The two major studies on private debt, both completed in the past two years and published outside the US, bear directly on this issue.

In Too Much Finance, published by the United Nations Conference on Trade and Development (UNCTAD) in March 2011, Jean Louis Arcand, Enrico Berkes, and Ugo Panizza found a negative effect on output growth when credit to the private sector reaches 104-110% of GDP. The strongest adverse effects are for credit over 160% of GDP.

The second is the 2011 BIS study authored by Cecchetti, Mohanty, and Zampolli. They found that private debt levels become “cancerous” (in BIS economic advisor Cecchetti’s own words) at 175% (90% for corporations and 85% for households) – just slightly more than the UNCTAD study.

The Nonexistent or Minimal Wealth Effect

The issue here is not whether the Fed’s policies cause aggregate wealth to rise or fall. The question is whether changes in wealth alter consumer spending to any significant degree. The best evidence says that wealth fluctuations have little or no effect on consumer spending. Thus, when the stock market rises in response to massive Fed liquidity, the broader economy is unaffected.

According to Dr. David Backus, economics professor at New York University, the stock market boom in the late 1990s helped increase the wealth of Americans, but that did not produce a significant change in consumption. As the stock market rose, Backus did not observe a big increase in consumption. And when it subsequently fell, neither was there a big decrease (Flavelle, Christopher, Slate, March 6, 2010, “Debunking the Wealth Effect”).

More Americans own houses than own stocks. This suggests that a change in home equity should have a bigger impact on spending than a comparable change in the stock market. However, Backus did not observe much of a wealth effect on consumer spending as housing prices rose, implying that the reverse effect was also minimal on the way down.

Backus’ analysis confirms research done in 1999 at the New York Fed by Sydney Ludvigson and Charles Steindel. In the Economic Policy Review, they found a positive connection between aggregate wealth changes and aggregate spending. But they wrote: “Spending growth in recent years has surely been augmented by market gains, but the effect is found to be rather unstable and hard to pin down. The contemporaneous response of consumption growth to an unexpected change in wealth is uncertain and the response appears very short-lived.”

In “Financial Wealth Effect: Evidence from Threshold Estimation” (Applied Economic Letters, 2011), Sherif Khalifa, Ousmane Seck, and Elwin Tobing found “a threshold income level of almost $130,000, below which the financial wealth effect is insignificant, and above which the effect is 0.004.” Thus, a $1 rise in wealth would in time boost consumption by less than one-half of a penny, and only for those in the upper-middle class and above.

It might surprise you to learn that the 30-year Treasury bond yield increased during QE1 and QE2, as measured by the average rate from when the policy was announced until it ended versus the monthly average after each program ended. Since QE3 is ongoing, we measured the change from year-end 2012 to the end of the first quarter 2013. Rates rose during that period, too.

The 30-year yield rose in all cases, by 109, 33, and 23 basis points respectively. When the Fed says it wants higher inflation and radically expands its balance sheet to achieve that objective, the short-term effect is to raise inflation, inflationary psychology, and Treasury bond yields, which are the anchor for all interest rates. The higher transitory inflation caused by the quantitative easing cuts into real weekly earnings.

The Fed Made Things Worse

In response to the Fed’s QE programs, stock prices rose, but no convincing evidence indicates that this has boosted consumer spending in any meaningful way. Treasury yields rose during those operations, in part because the rise in stock prices has been interpreted as a possible sign of better economic conditions, rather than merely of the excess liquidity created by the Fed’s balance sheet expansion. Although inflation has receded to less than a 1% annual rate, it did spike during the earlier phases of QE operations, thus eroding real income for those dependent on wages as their main source of income. The standard of living – defined as median household income – has fallen back to the level of 1995. The percentage of the population that is working is one percentage point lower than when the recession ended, and not far above the worst level of the past three decades.

As a sign of reduced economic opportunities from these failed monetary and fiscal policies, a record 1 out of 6.5 Americans is on food stamps, and a record percentage of those in the 25-34 age cohort is forced to live in their parents’ homes. Thus, for most households, economic conditions would have been better if the Fed had simply done nothing. Moreover, the problem of what to do with the Fed’s engorged balance sheet would not exist – a subject that has diverted valuable time from the more important discussion: how to right the mighty ship that once was, but no longer is, the US economy.

An internationally known economist, Dr. Lacy Hunt is executive vice president of Hoisington Investment Management Company[1] (HIMCO), a firm that manages $5.8 billion for pension funds, endowments, insurance companies, and others. He is vice chairman of HIMCO’s strategic investment policy committee and also chief economist for the Wasatch-Hoisington US Treasury Fund. Previously, he was chief US economist for the HSBC Group, one of the world’s largest banks. A native Texan, Dr. Hunt also served as senior economist for the Federal Reserve Bank of Dallas.