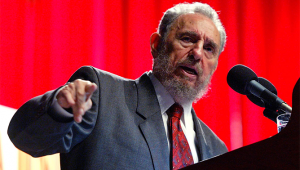 The last Marxist-Leninist to hold a place on the world stage has left, signalling the end to an era that saw revolutionists taunt empires and topple autocratic regimes. A charismatic romantic to the very end, Fidel Castro died on November 25 leaving his nation in mourning as Cuban exiles in Miami celebrated the passing of their nemesis, banging pots, honking horns, and setting off fireworks.

Always firmly in charge of his own destiny, Fidel Castro escaped convention from an early age. He was born in 1926 to Ángel Castro Argiz, a former soldier in the army of Spain, and his maid Lina Ruz González, also of Spanish descent. Though illiterate for most of his life, Mr Castro Argiz managed to acquire and run a 12,000 hectare plantation just outside Birán, a hamlet on what was then Cuba’s Wild East frontier.

Recognised as the most prodigious of his eight children, Mr Castro Argiz dispatched Fidel to a school maintained by the Lasallian Order in Santiago de Cuba in 1934. Five years on, Fidel was duly enrolled at a Jesuit college. Sent to Havana in 1942 to pursue further studies, Fidel – now sixteen – soon experienced his political awakening. He rarely bothered to attend lectures, yet somehow always managed to ace his studies in between many other, more exciting, endeavours.

Dabbling in student politics and speaking out against Caribbean dictators with the fervour of youth, Fidel in 1947 joined the ragtag army assembled by Juan Bosch – an exiled writer from the Dominican Republic – on Confites Key in the Sabana-Camagüey Archipelago along Cuba’s northern shoreline. Here, an expeditionary force of some 1,200 fighters, including veterans from the Spanish Civil War, had been amassed for an invasion of the Dominican Republic and the removal of its dictator Rafael Trujillo. However, while waiting for supporting airplanes and ships to arrive, the plot was discovered and foiled after intervention by the US ambassador.

“The Americans will pay dearly for their actions. When this war is over, a much longer and greater war will begin for me: the war I am going to wage against them. I realise this is my true destiny.”

Whilst most conspirators were disarmed, arrested, and jailed, Fidel Castro managed to evade capture by swimming to a deserted nearby key and from there to the mainland. Back in Havana, he promptly got married. While on honeymoon in New York, Fidel applied for a spot at Harvard Law School but was rejected, returning home to obtain his law degree in Havana instead.

Standing for a seat in congress on the ticket of the Orthodox Party, Fidel Castro’s brush with parliamentary democracy was cut short in 1952 by the coup that brought General Fulgencio Batista to power. With the elections cancelled, Fidel decided to fight the military takeover in court, fulminating from the stand that no judge could sentence any citizen on charges of sedition as long as General Batista’s “treacherous and illegal” power grab was allowed to go unpunished. Predictably, the court ruled against him. Fidel Castro, not unreasonably, interpreted the outcome of the trial as a clear sign that the constitutional order had broken down and concluded that armed rebellion was now fully justified.

Together with his brother Raúl, who had joined him in Havana, Fidel latched on to a group of conspirators who were plotting an assault on the Moncada army barracks in Santiago de Cuba to instigate an uprising against Batista or, failing that, obtain weapons for a guerrilla army. The attack failed miserably. Whilst most of the 95 men he led were arrested, tortured, and executed, Fidel Castro again managed to escape, retreating with a small band of plotters into the nearby jungle-clad mountains.

Giving in to appeals from the archbishop of Santiago de Cuba, the renegades surrendered on the prelate’s promise of a fair trial. Sentenced to fifteen years for his part in the failed uprising, Fidel Castro served only 22 months behind bars and was freed in the general amnesty of 1955. He immediately left the island for exile in the United States, ending up in Mexico to join, and take command of, yet another plot.

The rest is, indeed, history. Third time lucky, Fidel Castro re-entered Havana at the head of a victorious rebel army on January 8, 1959. That same day, during his (long) victory speech, a white dove released by one of the onlookers landed on Fidel’s shoulder, lending the revolutionary leader a mythic aura that never quite faded away.

Holed up in a camp high up in the Sierra Madre during the final months of the guerrilla campaign, Fidel Castro wrote to a confidant: “The Americans will pay dearly for their actions. When this war is over, a much longer and greater war will begin for me: the war I am going to wage against them. I realise this is my true destiny.”

In his prophetic letter, Commander Fidel was not only referring to the US support for Fulgencio Batista, but also to the media-fuelled Spanish American War of 1898 (“Remember the Maine!”) which firmly established the United States as an imperial power and saw Spain lose its most prized overseas possessions – Cuba, Puerto Rico, the Philippines, and Guam.

Fidel Castro had always been particularly upset over the 1901 Platt Amendment which established Cuba as a US protectorate, only notionally independent, with severe restrictions placed on the country’s ability to conduct foreign policy, maintain commercial relations, or sign treaties with other nations. The US also demanded that Cuba sell or lease it such lands as were deemed necessary for the establishment of coaling and naval stations. The 1903 agreement on Guantanamo Bay Naval Station, to which the US holds an open-ended lease, was based on the provisions of the Platt Amendment.

Just as Ho Chi Minh and other revolutionary leaders before him, Fidel Castro became a communist by default rather than conviction. In need of a discourse to distance his nation from its American overlords, and a development model to yield instant results, Fidel Castro became a Marxist-Leninist. At the time, it was the thing to do.

In the immediate aftermath of the revolution, Fidel Castro did try, however, to keep things civilised with the island’s uncomfortably big neighbour. During his famous two week sojourn in New York between April 15 and 27 of 1959, touted as an unofficial goodwill visit, Fidel Castro is received by Vice-President Richard Nixon (President Eisenhower was unavailable because of an engagement on the golf course), pays tribute at the Tomb of the Unknowns at Arlington National Cemetery, admires the national monuments to George Washington, Thomas Jefferson, and Abraham Lincoln, and accepts invitations to speak at Harvard and Princeton universities. Castro also finds time for a chat with UN Secretary-General Dag Hammarskjöld and to address a large crowd gathered in Central Park to watch, awestruck, this most romantic of heroes – a revolutionary heartthrob if there ever was one – deliver a fiery speech.

It was New York that showed Fidel Castro the power of charisma on which he would draw for the rest of his life. Not overly interested in the economic aspects of his new Marxist-Leninist ideology, or the nuts and bolts of running a country, Fidel Castro had more eye for the broad overall picture which he expertly shaped after his own image: bold, decisive, idealistic, and uprooting. Under Castro, Cuba became all of that and more: it stoked the fires of revolution in Latin America and Africa, championing the cause of anti-imperialism the world over. Whenever dissatisfaction at home threatened to get out of hand, Fidel Castro would temporarily open the floodgates and allow disgruntled Cubans to cross the Florida Straits on whatever floatation device they could find.

While he was devising plots and revolutions in faraway lands, Fidel Castro’s Cuba was, of course, kept afloat by the generosity of the Soviet Union and its satellite states, leading to charges that the island had merely changed one overlord for another. That, however, short changes Castro’s revolution. As he deployed his charisma, Cubans rallied behind their strongman and his tropical-flavoured brand of communism which knocked dissidents about a good bit but never quite descended into gulag-style barbarism. Meanwhile, national pride ran high as Fidel was credited with teasing and provoking the United States and showing the world how a small island nation could get away with it.

Fidel Castro knew how to play a global audience and caused much delight with touché moments such as when he invited the firefighter heroes of the 9/11 terrorist attack on the Twin Towers in New York to Cuba for the medical treatment they had been denied at home.

During regional summit meetings, Fidel Castro could always be counted upon to spook the US president du jour, sneaking up on the world’s most powerful man, causing Secret Service agents visible stress during the stealthy approach, only to jovially pump his hand, slap his shoulder, and shout “hombre!” It never failed to instantly cause presidents to lose their composure. Fidel Castro’s antics, the much anticipated highlight of every summit, were well-known amongst his Latin American counterparts who never quite managed to supress their admiration for the gutsy Cuban.

Whenever an American president would start to lecture him on democracy and human rights, Fidel Castro listened attentively. His answer, invariably, would be to remind his opponent that he had “literally” survived five, six, or seven of his predecessors and would still be around when the present one had departed.

Fidel Castro quite enjoyed stealing the Americans’ thunder and did so whenever given a chance. During the 1992 Earth Summit in Rio de Janeiro, he managed to fly in under the radar and upset the carefully choreographed security protocol the American Secret Service had put in place for the arrival of President Bush (The Elder) whose Air Force One touched down minutes after the Cubana de Aviación plane had landed to the astonishment of all present.

A day after pulling this stunt, Castro showed up at the convention centre on the outskirts of the city where the Earth Summit was taking place, timing his grand entrance only moments after the arrival of President Bush who promptly found his charisma severely lacking as he was left standing nearly alone, and much bewildered by the electrifying buzz suddenly palpable in the hall, while gathered dignitaries and officials rushed off to catch a glimpse of the Cuban.

A rebel rouser mostly underwhelmed by the global powers-that-be, Fidel Castro may not have managed to provide his people with anything but the most basic necessities of life, he did give his nation back its pride. Supremely headstrong and with an almost Nietzschean arrogance (Ecce Homo: Why I Am So Wise/Clever), Fidel Castro was absolutely convinced that his truth was the only one that mattered. Extremely well-read and able to instantly, and without skipping a beat, embark on a reasoned and informed monologue on any topic – from fish farming to neuroscience – Castro was a remarkable polymath of formidable intellectual power.

Kept away from the public eye as his health deteriorated, not unlike Ronald Reagan after the onset of Alzheimer’s, Fidel Castro – hero even to those who didn’t share his worldview – passed away November 25, 2016, aged 90, in Havana, Cuba.