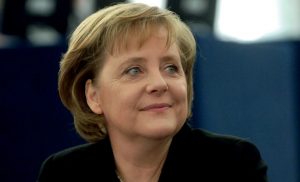 Playing nice gets results. Just ask Angela Merkel who became the undisputed leader of the free world after the US elevated a rather rude businessman to the presidency. Mrs Merkel’s phone manners are also much more effective. Instead of hanging up in anger, she just refuses to take calls as the Russians discovered to their dismay after they annexed the Crimea. The German chancellor, until then the Kremlin’s main conduit to the western world, gave them the cold shoulder, simply refusing to engage.

Who would have known that some 71 years after the conclusion of the largest conflagration in the history of mankind, the Germans – of all people – would get to lead the free world. Whilst Mrs Merkel seems at ease in her new role, her political future at home is less certain. Belatedly, a growing number of Germans are having second thoughts on her “wir schaffen das” can-do approach to the refugee issue. In fact, voters are becoming quite fed up with having to pay, time and again, to solve other nation’s troubles.

Before she allowed up to 800,000 refugees to resettle in Germany, the Merkel Administration had to help bailout Greece and other financially-troubled Eurozone member states. Though the rescue was largely a bookkeeping exercise which has, so far, not taxed the German exchequer, the impression remains that the country is being asked to take on the world’s problems without so much as a thank-you from the nations benefited. Greek protesters likening the German chancellor to a heartless Führer dispensing inhuman diktats did not go down well – and left a lasting impression.

Opposing Mrs Merkel in the upcoming election is Martin Schulz, the former president of the European Parliament, who now leads the social-democratic SPD and stands to do rather well at the ballot. Merkel’s Christian-democratic CDU and its Bavarian counterpart CSU together control 310 seat in the 630-member Bundestag. The so-called union parties, together since the late 1940s, received 41.5% of the vote in the 2013 election, against 25.7% for its natural nemesis, the SPD. Support for the government has, however, eroded significantly with the combined CDU/CSU currently polling at around 32% of the popular vote.

With its highly-complex mixed-member proportional representation system, which includes esoteric phenomena such as ‘overhang’ balancing seats, Chancellor Merkel may find it hard, if not impossible, to form a coalition that allows her to rule without taking on board a third partner such as the Greens or – perish the thought – the Left Party.

Though, for now, safe from extremist politics and rabid euro-scepticism, a post-Merkel Germany may not easily keep its pre-eminent position in Europe or globally. A capable politician who survived, and prospered, in the snake pit otherwise known as the European Parliament, Mr Schulz lacks the perspicacity and soft power skills that allowed Mrs Merkel to steer Germany to the top – without anybody other than, perhaps, the impoverished Greeks taking offense.

However, Mr Schulz lacks the statesman-like appearance and attitude the current German chancellor has finessed into a veritable art form. Not (yet) accustomed to see their country in the global driving seat, German voters are notorious for ignoring questions and issues that bear no direct relation to their domestic concerns. In a sense, to many the world stops at the borders. At home, Mrs Merkel battles more hot potatoes than immigration alone: opinions are divided when it comes to the need to re-equip and re-arm Germany’s defence. The economy, whilst humming along nicely, poses another worry as inflation picks up and the European Central Bank continues to insist on injecting money into the Eurozone’s economy. The call for Germany to do something about its excessive current account surplus is getting louder, yet Mrs Merkel is reluctant to encourage or incentivise consumers to embark on a spending spree. Fiscal probity remains the state’s official religion.

The good news is that whichever way German voters decide to go, populism is not about to take over in Europe’s largest and most dominant country. Thus, Germany is expected to remain the anchor of Europe and, indeed, a safe haven where alternative facts have not yet taken hold.