Europe & Greece: The Gathering of the Perfect Storm 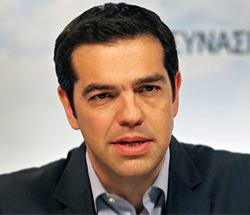 The bears took hold of most European markets earlier today on news that the Greek government is determined to end austerity and will not be seeking an extension of the bailout agreement with its creditors.

In a defiant speech delivered before a fully-seated parliament, Prime-Minister Alexis Tsipras on Sunday said that his administration will prioritise the needs of “long-suffering ordinary people” over those of creditors. While the prime-minister assured that Greece will do its utmost to reach a deal with the country’s creditors, he was adamant in affirming that austerity policies are off the table.

Prime-Minister Tsipras on Sunday unveiled a comprehensive set of initiatives aimed at lessening the social agony, including a return of the minimum wage to its 2011 level of €751 monthly, a halt to the sell-off of state-owned businesses, and changes to the tax code.

On Monday morning, Finance Minister Yanis Varoufakis sought to calm markets with assurances that talk about Greece’s impending exit from the euro is just unhelpful “chatter.” Mr Varoufakis reminded that his country’s fate is inextricably bound to that of Europe: “We can find the accommodation between Greece and our creditors, our partners, the EU, ECB and IMF.”

“In a defiant speech delivered before a fully-seated parliament, Prime-Minister Alexis Tsipras on Sunday said that his administration will prioritise the needs of “long-suffering ordinary people” over those of creditors.”

Mr Varoufakis also said that the policy of “contractionary contraction” to which Greece has been subjected simply does not work: “There is no economist I know in the world who thinks this programme has worked, or will work … it couldn’t work. It’s not a question of willpower or intelligence: it simply cannot be done in a depressed economy that has no viable or properly functioning banking system.”

In parliament, Mr Varoufakis said: “The time has come to say what officials admit when the microphones are turned off and say out in the open. At some point someone has to say no. That role has fallen to us, little Greece.”

Former US Federal Reserve Chairperson Alan Greenspan weighed in on the discussion, concluding – yet again – that the euro is doomed and Greece’s ditching of the common currency just a matter of time. Greenspan’s words resounded in London where Prime-Minister David Cameron snapped to prompt attention ordering the Bank of England to prepare a contingency plan to be implemented in case a “Grexit” is followed by a market meltdown.

With the Eurozone apparently shaking on its foundations, the European Central Bank pumping untold billions in faltering economies, and neighbouring Russia in the grip of a man on a rampage, one could be forgiven for thinking that a perfect storm is gathering over Europe.

Yet something quite remarkable has happened. In a first for Europe, a collective of intellectuals, university professors, and neophyte politicians has claimed power. A revolution of sorts is indeed in the making. The now dethroned aristocracy of Greece – corrupt powerbrokers and other parasites – would be well advised to start trembling: their days have been counted and their future looks bleak.

The overblown ado about Greece’s outsized national debt, and the need to service it until the end of days, is akin to a smoke-and-mirrors show: it detracts attention from a few more important – if less convenient – developments such as the shakeup currently underway at Athens’ government offices.

Sporting a Suit and Tie

Deputy Minister of Administrative Reform Giorgos Katrougalos – easily recognisable in cabinet meetings for being the only one sporting a proper suit and tie – is the man to watch. Mr Katrougalos, a civil engineer by trade, vacated his seat in the European Parliament to help his long-time friend Alexis Tsipras – now Greece’s prime-minister – clean up the corridors of power: “I want to help shape a new national beginning. Only a left-wing government can tackle the kind of reform that is urgently needed.”

Though not affiliated with any political party, Mr Katrougalos holds significant sway in the cabinet. He is the confidant and go-to guy of the prime-minister and few decisions are made without his input. Mr Katrougalos has been put in charge of dismantling the system of patronage and clientelism that has perversely pervaded the Greek public administration since the beginning of modern times.

Discouraging and even prosecuting the misuse of power is seen as a most promising way of saving taxpayers’ money: “We want to save on expenses as much as the previous government did. The difference is that we shall do so on the back of politicians instead of the people.” Mr Katrougalos also plans to revisit the famed Lagarde List of over 2,056 possible tax dodgers with undeclared accounts at the Geneva branch of the HSBC bank.

The list, rather a spreadsheet, was named after then-French Finance Minister Christine Lagarde who obtained it from the police and forwarded the file to the Greek government in October 2010. Nothing happened until two years later when the media reported the existence of the Lagarde List.

After hauling the journalist who found the list off to court for breaching privacy law – a charge promptly thrown out – the government half-heartedly launched an investigation which, to the surprise of few but the fury of many, failed to produce any noticeable results. The same fate befell yet another list of tax evaders – this one handed to the Bank of Greece and containing the names of around 54,000 people who spirited some €22bn out of the country at the time of the last crisis.

Truth be told, the Lagarde List is but a subset of a much larger cache of data containing some 130,000 names of possible tax dodgers. Though this data was forwarded to the relevant authorities in most EU member states, it did not result in the expected flurry of prosecutorial activity. Thus, Greece is by no means the only country to have largely failed to investigate the people whose names appear on this list.

Still, Mr Katrougalos is determined to have a second look at both lists, though not necessarily to nail the rich. He just wants them to refrain from buying government favours and start paying taxes. While working on the creation of a more transparent public administration, Minister Katrougalos has set the tone with a few minor, but symbolically important, changes.

All but a handful of top officials have lost their chauffeur-driven limousines while over 3,500 previously sacked public servants have been rehired. Perhaps more importantly, the hordes of consultants have been decimated. These professionals were hired at great expense to replace the civil servants made redundant by repeated austerity drives.

Vilified in Germany, The Netherlands, and Finland – Europe’s holier-than-thou poster boys of fiscal prudence – the Tsipras government argues that its administrative reforms are both profound and far-reaching and as such will break the nefarious cycle of political ineptitude that caused the crisis to begin with.

Finance Minister Yanis Varoufakis repeated – ad nauseam – that he fully understands and subscribes to the criticism levelled at Greece regarding the poisonous intertwining of public and private interests. While previous administrations may have provided lip-service to these ills, the current government has already put policies in place that will usher in an era of public probity.

The Greek government now needs some time to sort out the mess it inherited. It has asked its creditors for a reprieve of three to four months during which time the fiscal balance is to be maintained and most – though not all – policy directives imposed by the troika will be adhered to.

It would seem a reasonable request. Most likely, it will be granted – albeit grudgingly. The alternative leads to a scenario simply too dire to consider. Blowing up the Eurozone over Greece seems the utter folly and, paradoxically, will hurt the biggest creditor nations most. After all, no country benefited more from the euro than Germany did. Greece is a small enough price to pay for that blessed state of affairs.