UK Economic Growth: Beyond the Glitter 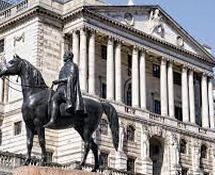 The UK economy may be growing at an impressive clip; the spurt is powered by borrowed money and, as such, akin to a bubble. The same holds true for the seemingly impressive economic performance of the United States.

With a current account deficit equal to a whopping 4.8% of GDP, Britain’s most successful export commodity is its own wealth, which now leaves the country at a rate of $163bn (£107bn / €139bn) annually.

The valiant efforts of Chancellor of the Exchequer George Osborne to minimise fallout have so far tricked financial markets into believing that Britain is doing just fine. It remains somewhat of a mystery why investors keep faith in Mr Osborne. The twin pillars that support the British economy – North Sea oil and the London City – are wobbling, if not crumbling.

Earlier this week, energy experts warned that production may be halted at some North Sea oilfields if prices drop any further. “Even at $50 a barrel, a number of fields are failing to break even. At $40 a barrel, which is where we’re heading to, a significant part of the North Sea oil supply becomes cash negative,” says Robert Plummer of the oil industry consultancy Wood Mackenzie.

Bank of England Governor Mark Carney said on Wednesday that the Scottish economy is expected to suffer “a negative shock.” Mr Carney, not usually one to eschew candour, told MPs of the Treasury Select Committee that the impact on Scotland of the downturn will be substantially mitigated by “the nature of the economic union that exists.”

“Even at $50 a barrel, a number of fields are failing to break even. At $40 a barrel, which is where we’re heading to, a significant part of the North Sea oil supply becomes cash negative.”

Meanwhile, the City is slowly coming to grips with the times and foreswearing its erstwhile less-delicate ways of raking in cash. Though still the domain of glitzy and racy financiers, the more nefarious effects of the 1986 Big Bang – the far-reaching and abrupt deregulation of financial markets – are slowly being undone, mostly courtesy of the EU’s financial regulatory entities and undoubtedly to the chagrin of Mr Farage.

With the Eurozone progressing steadily towards a fiscal and banking union – an inevitability if the euro is to survive (which it will) – the City may well suffer rules, instead of imposing them. Britain runs the risk of being outgunned and outsmarted at its own financial game by the continentals. There is no discernible rationale for the Eurozone to use an off-shore financial centre while perfectly viable “on-shore” alternatives are readily available in Frankfurt, Paris, and Amsterdam.

The numbers reveal a staggering divide not always present in public perception. While the much-maligned Eurozone boasts a trade balance of +$242bn in 2014 and racked up a $334bn current account surplus, the UK lost close to $200bn on its foreign trade, contributing towards a current account deficit of $163bn. It is not so much that Britain is unwilling to sign onto the common currency as it is that the country would prove a serious drain on the Eurozone, almost wiping out the block’s trade surplus and severely undermining its accounts. As such, the UK would be a most unwelcome addition to the Eurozone. One France is quite enough to keep things interesting.

While on the subject: the sneers directed at France emanating periodically from London, seem particularly misguided. For all the cost-cutting, the UK budget deficit of -5.1% of GDP makes the French look positively stingy (-4.4%). The markets seem to be catching on. While France can easily place its 10-year bond (OAT) at an interest rate of 0.7%, UK 10-year gilts need offer a 1.7% rate to pique investor interest.

What the numbers also show is that any and all attempts at undermining the euro are doomed to fail. Eurozone economic growth may be anaemic, its books are in order and the European Central Bank’s war chest would put both Ali Baba and Scrooge McDuck to shame.

The choice seems to be one between accelerated growth, spurred on by copious deficit spending, and more modest growth rates with balanced accounts. The latter option is the one preferred by the ever-prudent Germans and Dutch, while the former is espoused by both the British and Americans.

The Anglo-American option delivers economic growth, albeit at a price most continentals would consider too steep. Contrast this to the German-Dutch approach that keeps economies shackled to the higher ideal of fiscal responsibility. Hence, the choice is a simple one: either grow out of the hole or stop digging.