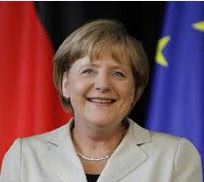 The job of German chancellor is not one for the faint of heart. It all boils down to leading one of the world’s greatest powers, and safeguarding its many interests, without ever giving in to the temptation to actually flex the country’s muscle.

Where other countries may holler and shout at will should their affairs be threatened, Germany may at most whisper its concern. As soon as a German chancellor even thinks about wielding power, however modestly, his or her face will promptly appear on protesters’ placards besmeared with a toothbrush style moustache. Though fading slowly, the burden of history is not to be underestimated.

In office since 2005, Chancellor Angela Merkel has a keen sense of the do’s and don’ts that define Germany’s position in Europe and the wider world. Rather than feeling boxed-in, Mrs Merkel artfully pushes these confines to the limit – and even slightly beyond – without ever losing sight of other nations’ sensibilities. She does so in order to assume the role that is expected of her as the leader of Europe’s largest and possibly most robust economy. It is also a role not everyone is entirely comfortable with Germany assuming.

“Mrs Merkel is not about the flavour of the day, or the path of least resistance. Instead, she takes the long view and argues, quite convincingly, that Europe must put itself on a sound footing if it is to prosper.”

Still, Mrs Merkel has played her part exceedingly well and deserves lavish praise for. A former inhabitant of the German Democratic Republic (DDR) and fluent in Russian, she also developed her own form of “ostpolitik” by establishing a personal rapport with Vladimir Putin in an attempt to take the edge of Russia’s expansionist foreign policy.

In August, Mrs Merkel landed in Kiev for a crisis meeting with Ukraine’s president Petro Poroshenko after a Russian aid convoy lumbered into the country without bothering to comply with customs checks. Het impromptu visit sent a clear message to the Kremlin and resulted in the convoy hightailing back across the border.

Nine years into her chancellorship and with approval ratings reaching 77% this past summer, Mrs Merkel is far from a spent force in German politics. Her handling of the economic crisis was nothing short of exemplary. Imposing wage restraints from the get-go, her government managed to keep German industry humming throughout the lean years. Though elsewhere in Europe German-imposed fiscal austerity is hampering growth, at home monetary discipline is hailed as a key ingredient to lasting success.

However, Mrs Merkel faces growing opposition in Europe. This autumn, both France and Italy will challenge her economic leadership by arguing that the tight fiscal policies Mrs Merkel insists on are counterproductive, destroy social cohesion, and undermine long-term growth.

French minister for industrial renewal Arnaud Montebourg called Mrs Merkel’s economic policy both “Kafkaesque” and a “financial absurdity.” He openly called for his government to steer its policy away from Mrs Merkel’s “dictates.” Mr Montebourg’s exceptionally strong-worded criticism of the French government’s austerity drive contributed to the fall of the cabinet on August 25.

Mrs Merkel, however, is not one to be easily swayed and sticks to her guns even in the face of overwhelming opposition. As such she is to be admired. Mrs Merkel is not about the flavour of the day, or the path of least resistance. Instead, she takes the long view and argues, quite convincingly, that Europe must put itself on a sound footing if it is to prosper.