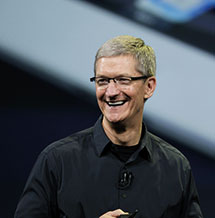 He wants to be remembered as a good and decent man. Not that he’s going anywhere, anytime soon: Apple CEO Tim Cook (56) is determined to take proper care of the legacy left by the company’s visionary founder Steve Jobs (1955-2011) who is the closest thing the IT universe has to a deity. Mr Cook, in contrast, does not at all aspire to immortality: he merely wishes to perpetuate the ethos of his predecessor – attention to detail, beauty in simplicity, and a relentless dedication to perfection.

It is by no means easy to walk in the great man’s shoes. Apple-diehards – a breed contemptuous of anything not graced by a half-eaten fruit – have accused Mr Cook of blandness and a lack of originality, two great sins. However, Tim Cook is perhaps best explained as a loving and caring father who coaches a contrarian and slightly rebellious adolescent to maturity.

No longer the exclusive domain of the self-anointed über hip, Tim Cook’s Apple has grown up and can now be depended upon to consistently deliver quality. Though the company is no longer at the absolute cutting edge of technology, ceding ground to relative newcomers and even to – horror of horrors – old-school tech giants such as Microsoft, Apple can still be relied upon to push holistic processes that bring together a host of devices which, until quite recently, were largely unaware of each other’s existence.

“Under Mr Cook, the company has become an oasis of peace with a zero-tolerance policy towards people with disagreeable personalities and larger-than-life egos.”

Unveiling a new and slightly improved product line in early June at Apple’s annual developer conference in San José, California, Mr Cook received considerable flak in the press for underwhelming the assembled crowd. The company’s only truly new product, the HomePod loudspeaker scheduled for launch just before this year’s festive season, seems to fall in the me-too category, streaming music and giving the company’s AI incarnation Siri a presence in the living room where she will compete against Amazon’s already fairly well-established Alexa who takes orders, and provides answers, through Echo – the online retailer’s speaker pod.

What most of the specialist press fails to pick up on is that Tim Cook doesn’t like to boast or talk about projects under development – preferring instead to keep things under wraps until the technology has matured and is ready for market. The tip of the veil is occasionally lifted to show investors that Apple has not fallen asleep at the proverbial wheel such as when the company confirmed speculation that it is working on a self-driving automobile which may be manufactured in-house. Detroit has been warned.

With a leadership style that remains firmly focused on people, strategy, and execution, Mr Cook leaves it largely to the company’s engineers to come up with new products. He is not necessarily looking to replicate the original success of the iPhone – though that would be nice – but prefers to find ways to tightly integrate Apple’s current products – opting for evolution rather than revolution.

Under Mr Cook, the company has become an oasis of peace with a zero-tolerance policy towards people with disagreeable personalities and larger-than-life egos. A number of Apple-watchers – yes it is a thing – have remarked that Steve Jobs usually kept troublemakers aboard, recognising that their contributions to the company often outweighed their abrasive personalities. Tension and disagreement may have helped Apple scale great heights, it is not the way by which Mr Cook wants to further the company. That is not to say Tim Cook can’t be curt and dismissive of others: shareholders who objected to Apple’s views on climate change and sustainability were told to “get out of the stock” if they did not share those concerns.

As an excellent corporate administrator, Mr Cook helped the company survive its near-fatal downturn during the latter half of the 1990s when revenues plummeted and the company was saved from bankruptcy by a $150m cash injection from none other than Microsoft. Under Mr Cook’s guidance Apple shot back, seeing its revenues multiply from a low of barely $6bn in 1998 – pocket change by today’s standards – to a whopping $215bn in 2016. Whilst others in the company were tinkering with the next-biggest-thing in computing, Tim Cook was working the spreadsheets – taking care of business.