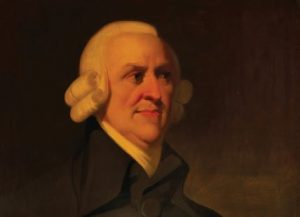 The year 1776 marked the dawn of modern capitalism: nothing to do with a few rebellious colonies unleashing a revolutionary war against the crown of England. It was in 1776 – 239 years ago – that Adam Smith published The Wealth of Nations: a book that marked the birth of financial understanding and left its author – a mild-mannered scholar from the east coast of Scotland – forever known as the Father of Economics.

Born in Kirkcaldy in the summer of 1723, Adam Smith quickly learned to adapt in the world. His widowed mother lived hand-to-mouth working in a mill or helping process fish in the harbour. Deprived of a father, the young Adam Smith had to quickly assume as the man of the house. He displayed a talent for helping his mother run the home while dedicating himself to the study of Latin, mathematics, writing and history at nearby Burgh School. He quickly mastered skills that would serve him well when, at the age of 14, the intelligent young man was offered a scholarship at the University of Glasgow.

It was in Glasgow that both tutors and peers began to notice Mr Smith’s aptitude for translating complex problems into layman’s terms. By 1740 he had been urged to take his talents to Oxford where his burgeoning ingenuity could be further honed.

In 1748, Mr Smith returned to his native Scotland, delivering public lectures at the University of Edinburgh where he was discovered by David Hume, the philosopher and economist. The two became great friends. Mr Hume helped him to write The Theory of Moral Sentiments in which Adam Smith examined human morality. Although the book didn’t change the world, it did set him on a new path. Before long, Mr Smith had become the tutor of the future Duke of Buccleuch whom he accompanied on his travels to France. It was during these trips that Adam Smith rubbed shoulders with some of the most known thinkers of his generation such as Benjamin Franklin and Anne-Robert-Jacques Turgot.

While forging these chance friendships, Adam Smith spent time examining the infrastructure of other countries, allowing his growing appetite for economics to blossom. In his usual style, he quickly grasped the complexity of it all, and then set about compiling something that really would change the world.

Despite his analytical mind and gift for swift interpretation, it took nine years to publish An Inquiry into the Nature and Causes of the Wealth of Nations. Above all else, Adam Smith was a perfectionist. He always had been. Perfection takes time, so he didn’t allow the manuscript to leave his desk until he knew it was ready.

The book was an instant sensation. It focused the great minds of a generation on what really made economies tick.

At the time, a country’s wealth was largely determined by how much gold it had locked away in vaults. In The Wealth of Nations, however, Smith had determined that it was in fact the sum of production and commerce (known today as gross national product, or GDP) which accounted for financial worth. He also explained division of labour and the productive capacity.

His work could not have been better timed. Great Britain was poised and twitching in the starting blocks of the Industrial Revolution, and, suddenly, here was the book – often playfully labelled The Capitalists’ Bible – that provided a practical guide on how to leverage capitalism’s inner logic. In a nutshell, The Wealth of Nations explains how and why free-market economies become not only the most prosperous, but also the most beneficial, to society and the people therein.

It’s hard to imagine if Adam Smith ever fully appreciated the unprecedented and lasting impact his classic book would have on the world of economics. It remains, to this day, one of the most influential works ever published. And although some critics at the time complained Adam Smith had not, in fact, originated many of the ideas within the book’s pages, he was undoubtedly the first person ever to compile and join them, together with his own philosophies, into a format that easily explained the intricate workings of a contemporary economy.

Fine restaurants may serve as a simple analogy. Nearly all the world’s best chefs are “classically trained,” in as much as they have all benefited from a thorough schooling in the cooking of the classic dishes. In the same way, most of the leading economists of our time will have spent their formative years with their noses in the pages of Adam Smith’s work. A copy of his book even had a permanent place in the handbag of the late British Prime Minister, Margaret Thatcher – a fact which is often considered to be the reason his image features on the back of a £20 banknote.