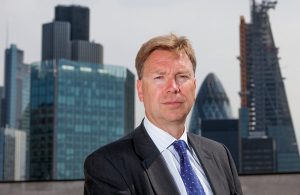 Aquis Exchange founder and CEO Alasdair Haynes had his Eureka moment while buying a mobile phone for his son, Alexander, then aged 13, in Tunbridge Wells, England.

Young Alexander “wanted the latest iPhone with unlimited everything”, of course. Alexander (now 19, and working in the Aquis IT department as part of a government education scheme) had to settle for a £9.99 Samsung. It kept him happy for the moment. But Alasdair got something more valuable from the encounter, in the form of the sudden realisation that the subscription model was the future – regardless of the industry or sector.

“I realised then that Vodafone was managing message traffic just as stock exchanges do. The whole concept was based on subscriptions.” Haynes snr looked at the markets and realised that subscription services were outstripping the competition in just about every field – except trading platforms. With everyone and their dog moving in the same direction, Haynes knew it was time to act and get ahead of the game. “One day,” he thought, “all trading will be like this.” Those prophetic words would become something of an Aquis company motto. The seed of his idea germinated, sprouted, and a year later, Aquis Exchange was launched.

Before that, Haynes had been the CEO of Chi-X, Europe’s largest stock exchange, which he sold for $360 million to BATS who then made him and over half the staff redundant. Haynes created a team from those staff members who had been let-go (something he was allowed to do as part of his contract) and he set about doing what he does best: changing things up. His intuition was on-target, and his subscription model has indeed revolutionised the way trading platforms are run.

“I realised then that Vodafone was managing message traffic just as stock exchanges do. The whole concept was based on subscriptions.”

The benefit of a fixed price had proven its worth in the areas of phone calls, music and films. Aquis’ time had come. But it wasn’t all plain sailing, and there were lessons to be learned. “We made every mistake in the book,” Haynes admits. “We assumed that venture capital lends money to invest in new ventures, which I suddenly found wasn’t the case. So we ended up going to high net-worth individuals that I’d got to know in the industry. They supported us and backed us in the beginning.”

With regulatory approval and a good team behind him, it was time for Haynes to get stuck in and prove his theory. Aquis Exchange launched in November 2013.

One of the early problems to raise its head was the publication a few months after launch of Michael Lewis’ financial expose entitled Flash Boys: A Wall Street Revolt. The book fed the public a new, negative image of electronic trading. It took time to overcome those adverse perceptions, says Haynes; he estimates it pushed things back by 18 months for the company. The team soldiered on.

There are two key things that differentiate Aquis from the competition: the subscription model, and its ban on certain types of trading. He brought in a rule that proprietary trading firms – firms that typically do not act on behalf of customers – could become part of Aquis, but only if they posted orders. This was the “post-only order type”. The trading firms had to supply liquidity to the market; they could never aggress on their own behalf or take business away. Stall-holders in a market place, with no right to buy goods from anyone else, in Haynes’ analogy.

With that single move, “the making of Aquis”, it became a protected market for customer business. “Ask any asset manager: prices move because of information leakage,” says Haynes. “Markets are informed, and prices move away.” When buying stock on Aquis, prices don’t go walkabout. Well, not far, anyway. With regulatory changes in the industry, there was an obligation to get “best execution” – and with a deep liquidity in a protected marketplace and subscription prices with a marginal cost of zero, Aquis had that one covered.

The company completed an IPO earlier in June 2018 – not so much to raise money, Haynes says, but to raise the company profile. The anticipated market share was put at 3% by the end of the year. At the time of the float, the figure was 2.25%; by October, it had risen to 3.67%. “That’s a massive rise,” observes Haynes.

His has not been not an unadulterated success story; between a career in investment banking at firms such as UBS and HSBC and running ITG, Chi-X and now Aquis, Haynes (who left school after A levels) had a bad patch.

He got cocky and set up a mini hedge fund, using his own money. “I was absolutely crap,” he says. “I found it really hard, I lost all my money. I had a house in France. I lost it. It was the lowest point you can be, thinking you can’t get out of the hole.”

Haynes scrabbled and scrambled. He got out of that hole, and risked getting into another one. Scrabblers and scramblers have their own guardian angels, and Haynes had his.

His legacy, as he would like to see it at the age of 58, is to have changed an industry. In fact, he would like those words – “He changed an industry” – as his epitaph. He is also proud of his professional conduct, having won the respect and admiration of his loyal troops – of the seven key players who started Aquis with Haynes, only one has left the company, because of ill-health. Haynes ensures the workplace is never dull. “Enjoyment is crucial to work,” he says.

Haynes the Younger, if you were wondering, wasn’t rewarded with the latest iPhone for his part in this power play. “He lays claim to a founder’s idea,” says his father, “but he is literally now the most junior person in this company.”

No moving prices, no greedy or tricksy electronic trading, no regrets – and no nepotism at Aquis, it seems.