CFI.co Meets the Provincia Fondos Management Team: The Team who Made it Possible 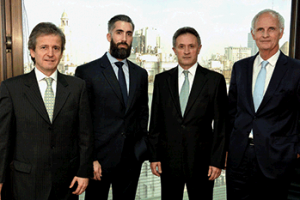 Mr Eleta joined the company in January 2016, after Maria Eugenia Vidal was elected governor of the Buenos Aires Province. Mr Eleta and his team have carried out a thorough corporate restructuring resulting in high growth and outstanding performance of the assets under management. Within this period, Provincia Fondos’ market share increased from 0.6% to more than 3%, while its fixed income funds performed within the top-5 in their categories.

Mr Eleta holds a degree in Public Accountancy from the Universidad Católica Argentina and has developed an extensive career in the financial markets for more than thirty years. For over a decade, he chaired the managing boards of ABN AMRO Asset Management, ABN AMRO Trust, and ABN AMRO Securities in Argentina. Mr Eleta also held office as director at ABN AMRO USA (New York) in charge of the Latin American Equity division.

Afterwards, he founded his own asset management company – RIG Asset Management – which was later acquired by a major local financial group.
When Mauricio Macri held office as governor of the City of Buenos Aires, Mr Eleta was appointed Undersecretary of Modernisation and then deputy CEO in city government-owned Banco de la Ciudad de Buenos Aires.

He currently chairs the boards of Provincia Fondos and Provincia Bursátil and is also member of the supervisory board at Caja de Valores, the only central securities depository in Argentina. In addition, Mr Eleta chairs the management committee of Provincia Fondos which also includes Esteban de Apellaniz, Alvaro Aviles, and Jorge Blanco.

Mr Apellaniz received a degree in Business Administration from Universidad Católica Argentina where he also held a professorship. He is a highly reputable businessman in the agricultural sector.

Mr Aviles has previously worked at Premium Asset Management and Accenture in both financial advisory and management control roles. Mr Aviles graduated from Universidad Torcuato Di Tella with a Bachelor’s degree in Corporate Economy and a Master’s in Finance.