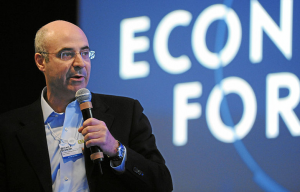 William F Browder of Hermitage Capital Management has been a Davos regular for over twenty years, unfailingly embarking every January on a pilgrimage to the Swiss resort town to mingle with his peers, swap experiences, and ponder the challenges ahead. As the 3,000-odd participants of the World Economic Forum’s (WEF) annual meeting considered the restless world, Mr Browder noticed that, for the first time, consensus proved elusive: “Whilst everybody is staring into the abyss, nobody agrees on the answers.”

The challenge for this year’s Davos gathering was find ways to engage disgruntled voters – those who propel populism upwards – and show them the benefits of globalism, i.e. the world created by the Davos Man for his own enjoyment. In a tweet from the Davos Congress Centre, one of the participants, a political analyst, concluded that the “elites” won’t be able to halt the rising tide of populism until they start seeing it as a symptom instead of a threat.

In a sign that business-as-usual is being undermined, billionaire hedge fund manager Ray Dalio was driven to near-exasperation during one of the panel meetings on how to address the crises assailing the middle class, exclaiming: “Populism scares me.” Mr Dalio offered a tentative solution by way of lowering taxes and advancing deregulation. As such, the hapless billionaire put his ignorance on display for all to see – and shudder. The poor man seems clueless as angry peasants get ready to storm his castle.

“Whilst everybody is staring into the abyss, nobody agrees on the answers.”

Jack Ma, founder of Alibaba – the world’s largest marketplace – and apparently more in touch with reality, put in his tuppence and concluded that Americans in particular are not well-versed in properly distributing national income. Meanwhile, George Soros, forever known as the man who broke the Bank of England, put his trust in the strong democratic institutions of the United States to prevent President Trump from becoming a dictator: “He would most certainly turn into one if it were not for our traditions and institutions,” Mr Soros added during a dinner meeting he hosted Thursday evening in Davos.

As of late, the celebrated billionaire investor and philanthropist has been caught out on the wrong side of events, reportedly losing up to a billion dollars on sterling long positions in anticipation of a Brexit rejection by British voters. Mr Soros compounded his loss by shorting the US dollar in the wake of Donald Trump’s election to the White House. In Davos, the Hungarian-American investor admitted that the US market is likely to remain bullish as the Trump Administration promises more deregulation and lower taxes. However, Mr Soros does not share in the optimism and revealed that he insists on shorting the market: “It will not do very well and I remain convinced that the Trump Administration will prove a monumental failure.”

If anything good came out of Davos this year, it was the realisation that business leaders at long last seem to have become aware of the growing unease. According to a survey amongst “elite respondents” in 28 countries conducted by American PR giant Edelman, trust levels are crashing. The poll found a “yawning trust gap emerging between elite and mass populations”. Accounting firm PwC confirmed the findings. Its survey of close to 1,400 corporate executives in 79 countries discovered that 44% of respondents did not believe that globalisation had helped reduce inequality. The view prevalent in the lower ranks of the corporate food chain was noticeably dimmer.

“The most shocking statistic of our whole study is that half the people who are high-income, college-educated, and well-informed also believe the system doesn’t work,” said Richard Edelman who was “stunned” by the lack of confidence amongst the elite. However, Mr Edelman thinks that popular anger is misdirected and said that over the next fifteen years, technological innovation will have a more adverse effect on middle class incomes than globalisation. As such, the current debate may already be out of date and any attempt to reverse globalisation pointless. According to economic strategist Gerard Minack, robotics and artificial intelligence will shortly eliminate the need for low-cost labour. “At that point – and it is not too far away – workers in both developed and developing markets will feel the pain, intensifying the call for action.”

Whilst the 2017 Davos confab shows that the powerful are not entirely alienated from reality. However, meaningful solutions remain in short supply. The noises produced bear the hallmark of political correctness – everybody is mightily concerned about “global imbalances” and such – but in truth, the participants of the forum trek up the mountain for one reason only: to seek advantages. Governments aim to attract investors who, in turn, come armed with wish lists, itemising the obstacles to increased profits. Representatives of civil society – bravely proclaiming the need to address inequality, global warming, and other collective ills – are caught in the middle: while the big boys talk business, they may provide the soothing narrative, ensuring all and sundry that attention is duly being paid to righting the wrongs of global capitalism.

Conceived as a private venue for decision makers to meet, talk, and plot a better future for the world, the WEF flagship event in Davos has become a media circus that trains microphones and cameras on assorted bigwigs who patiently explain that – no – they are not to blame, and – yes – they will promptly fix whatever issue causes concern.

As the 2017 talk-a-thon winds down and the participants disperse, the world has found out that China is the new champion of globalisation; robots are coming to steal jobs; inequality remains a concern; and Great Britain is turning inwards in order to become a beacon for free trade. Indeed, responsive and responsible leadership is required to make sense of it all. WEF Founder and Executive Chairman Klaus Schwab read the times correctly when setting this year’s theme. It is scarcely his fault that others seem to lack his well-justified sense of urgency.