Greece vs The Euro Righteous: Waiting for the Other Guy to Blink

So far, nobody in Brussels blinked. However, before the week is out somebody will. An eleventh hour compromise between Greece and its creditors is more than likely. According to the analysts at Morgan Stanley, the probability of a Grexit is still only about 20%. In the most European of outcomes, both parties will probably be allowed to claim victory while the real hard issues are skilfully dodged and marked for discussion at a yet-to-be-determined future date.

The drama unfolding in Brussels contains an above-average amount of political posturing. Greece must be castigated for its recalcitrance, or at least seen to be punished. Therein lies the clue: away from the microphones and cameras most Eurozone finance ministers reluctantly admit that the Greek have a point and that austerity is not the way forward – Greece must be allowed a breather, albeit a modest one.

However, these same ministers need to keep an eye on the home front. Here, patience tends to run thin and tempers high. Concessions to Greece will not be appreciated. It is thus that on Monday Greece was told by the finance ministers of the Eurogroup to hoist the white flag or face annihilation. There was no ambiguity in the message delivered by Eurogroup President and Dutch Finance Minister Jeroen Dijsselbloem: Greece simply must accept an extension of the €172bn bailout programme including its many harsh conditions.

“The drama unfolding in Brussels contains an above-average amount of political posturing. Greece must be castigated for its recalcitrance, or at least seen to be punished.”

Interestingly enough, Greece has not received an either-or ultimatum. The “or” is implied and may – or may not – represent a rather tumultuous exit from the Eurozone. Greek Finance Minister Yanis Varoufakis doesn’t think this is a scenario likely to play out. He is probably right. As a debtor nation, Greece is not entirely bereft of power. In fact, the Greek would seem to hold a trump card, or two, up their sleeve.

Should Athens persist in its refusal to accept the conditions attached to the bailout programme, it will forfeit access to the billions the country needs in order to meet its financial obligations in 2015. In order words, without the bailout billions, Greece is set to default on its debt.

The country needs at least €6bn in March, €3bn in April, and another €16bn throughout August to meet maturing debt obligations. Its banks also need access to the emergency liquidity assistance (ELA) facilities provided by the European Central bank (ECB). Without this lifeline, Greek banks would crumble almost instantly.

All this creates a most interesting reality. So far, Eurozone member states have not lost money on Greece. In fact, most have made a tidy profit by co-signing loans for Greece and charging for the privilege. In case the country is forced into default, tens of billions of euros must be written off as nonperforming loans. Governments – not banks – will take a severe hit.

European governments and the International Monetary Fund (IMF) together have underwritten around €216bn of Greek debt in addition to €38bn of securities under the Securities Market Programme (SMP). Official creditors (governments and multilaterals) are on the hook for 94% of Greece’s debt to non-residents.

Euro area banks behaved differently. They reduced their exposure to Greece from €128bn in 2008 to about €12bn in September 2013 and have kept it at that level ever since. Curiously enough, the only banks to have increased their exposure to Greece are the German ones. After first limiting their potential downside to €3.9bn by the close of 2012, German banks now have again around €10bn in Greek debt on their books.

Still, the contagion risk of a Grexit would be minimal. During 2011-12 crisis it was widely feared that by ditching the euro, Greece could cause other troubled countries – Portugal, Spain, and quite possibly Italy – to tank as well. Those fears have largely dissipated. Over the past few years, the weaker Eurozone nations made significant progress in strengthening their banking system and balancing budgets. Today, they are nowhere near tumbling.

Thus Greece is an isolated case. However, its exit from the Eurozone is a Herculean (or rather Heraclean) undertaking not for the faint-of-heart. The Maastricht Treaty that called the euro into existence does not contain an exit clause. In fact, no legal mechanism exists for a Eurozone member state to revert to its national currency.

Currently, the only way out is to exit the European Union entirely. Any EU member state may of course leave the union at any time and for whatever reason, but nobody – least of all the Greek – is contemplating such a move.

So there is no legal framework that allows a Eurozone country to stop using the common currency. Crossing this line, the EU will be entering virgin territory, an exercise fraught with unforeseen dangers. Also, the absence of an exit clause in the Maastricht Treaty is not a design flaw: it actually has a good reason.

From its earliest days, European integration was conceived as a linear, one-way exercise in nation building on a continental scale. A Grexit would dispel the EU’s foundational myth and open a Pandora’s Box of terrifying questions: which country would next shift into reverse gear and can EU member states pop in and out of the euro at their convenience? Is a Spanish euro the same as a German one and can free trade be maintained when some seek a competitive edge via devaluation?

Although rather inexperienced – if not positively hapless – as a politician and none too convincing as a financial ironsides, Dutch Finance Minister Dijsselbloem will undoubtedly not want to be remembered for causing the euro project to falter and fail through personal intransigence. Mr Dijsselbloem is but an intellectual featherweight compared to his Greek colleague Yanis Varoufakis – an accomplished academic and original thinker, and dangerously well acquainted with the dark art of game theory.

The president of the Eurogroup may exercise some control over the purse strings, he runs the risk of ending up on the wrong side of history. For all his Calvinistic righteousness, Mr Dijsselbloem may also cause Eurozone countries to lose untold billions in unrecoverable Greek debts.

Not all is lost. After Monday’s clash in Brussels, French Finance Minister Michel Sapin revealed that in between the shouting “some consensus” was reached. Most finance ministers agreed that Greece should indeed be allowed to reduce its primary budget surplus from 4.5% to 1.5% in order to free up some additional money for spending on social programmes. In return, Greece has agreed to shelve any and all suggestions regarding a debt haircut. That idea – always a nonstarter – is now off the table.

European Commissioner for Economic and Financial Affairs Pierre Moscovici on Monday also insisted that the negotiating process is still in full swing and will require a measure of flexibility on both sides: “There needs to be room for politics. There is not one paper or another paper. There are contributions to a global agreement.” While Mr Moscovici remains convinced that a solution is possible, he also admitted that there is no Plan B.

The lack of an alternative – aka TINA (There Is No Alterative) – and of an exit mechanism, plus the high price that the remaining Eurozone members are liable to pay after provoking a Greek meltdown, all imply that a solution of some sort will be reached before long. Apart from financial considerations, there is also a moral dimension to the conundrum surrounding Greece: no other country has done more to improve its ways. That merits recognition.

Fair enough, Greece had some catching up to do; but contrary to popular belief, successive Greek governments have bitten the bullet and amassed an enviable track record on reform that – according to the OECD (Organisation for Economic Cooperation and Development) – is without equal (see graph below). 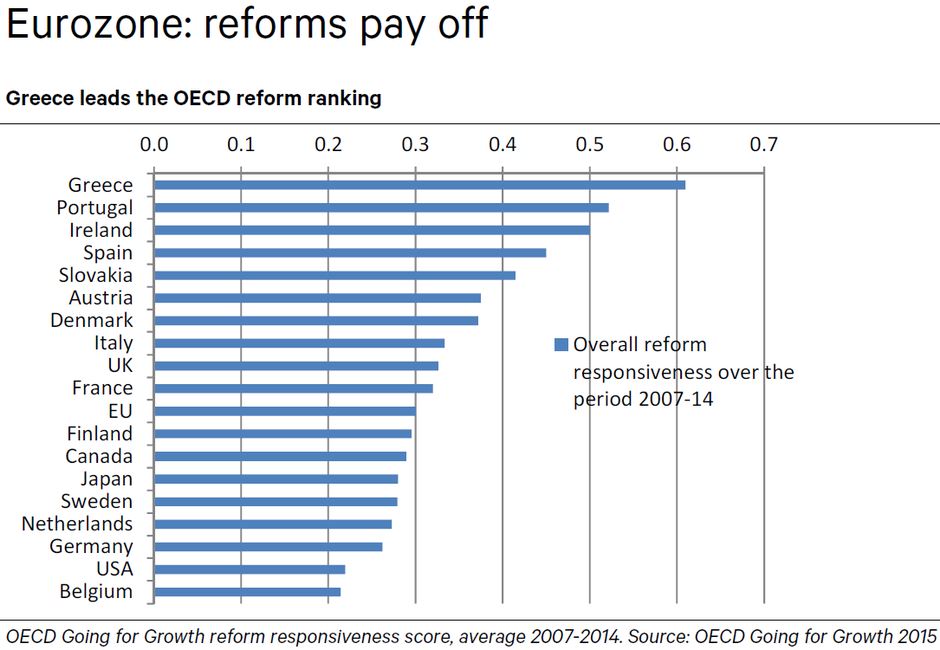 The new government in Athens merely argues that is has done quite enough for now and needs some time – measured in months rather than years – to rebuild its battered house and lessen the social cost of seven years of imposed austerity. It is not an altogether unreasonable request. To deny Greece the reprieve it desperately seeks and needs – and do so out of a misplaced sense of fiscal justice – is both silly and dangerous, if not reckless.