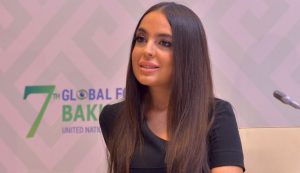 As Donald Trump moved into the White House, reluctantly swapping his gold-clad luxury pad in New York for the relatively austere dwelling on Pennsylvania Avenue, half a world away a government is celebrating the arrival of its moment: Azerbaijan is set to become a key US ally in Middle Eastern affairs with Baku – a city of glamour and plenty newfound wealth, and as such instantly appealing to the tycoon-turned-president – gaining its long-sought status of regional powerbroker.

In the Muslim world, Azerbaijan – sandwiched between Russia and Iran, two increasingly assertive powers – enjoys a unique position and one that merits recognition. While he rules a Shi’ite nation, President Ilham Aliyev (56) points out that his country boasts one of the oldest Jewish communities in the world. In fact, Azerbaijan is one of only a select few countries where Christians, Jews, Baha’is, and Shi’ite and Sunni Muslims coexist in peace and harmony – a feat of immense importance as the incoming Trump Administration inherits a deconstructed policy for the restless region.

Azerbaijan is not just a haven of religious tolerance; the country of eight million also assumes an outsized role as a dependable provider of energy to both North America and Europe. Azerbaijani exports of oil and natural gas – boosted by the completion of a 1,768 kilometre-long pipeline linking the country’s Caspian Sea oilfields with Ceyhan, a seaport on Turkey’s south-eastern shore – will already this year allow Europe to diversify its energy procurement and lessen the continent’s dependency on Russian supplies which, in the recent past, have been used as a political weapon by the Kremlin.

It is widely expected that President Aliyev will be amongst the first foreign heads of state to be invited to the Trump White House in recognition of his country’s pivotal role in the region. Additionally, the White House has cast an eye on Azerbaijan’s State Oil Fund (SOFAZ), the country’s $35bn sovereign wealth fund as it considers public private partnership for the long overdue upgrading of the United States’ infrastructure. Though SOFAZ reserves have been leveraged to compensate for low oil prices and underwrite social programmes deemed essential, Azerbaijan is considered a premier partner as the US tries to regain the initiative in the Middle East via active engagement with dependable partners.

Well on its way to implementing a sustainable development model that aims to ensure the country’s long-term prosperity, Azerbaijan moved to place ESG (environment, social, and governance) values centre stage as it seeks to diversify its economy. Leyla Aliyev, the president’s first daughter, has taken the lead with the founding of the International Dialogue for Environmental Action (IDEA) which seeks to offer young people a global platform for sustainability. The idea was inspired by the toxic legacy left after the Soviet Union fell apart in the late 1980s. Whilst exceptionally rich in natural resources – and beauty – Azerbaijan suffered severe environmental degradation as a result of Soviet extractive policies which seldom took environmental concerns into account.

Ms Aliyev has been a driving force behind a large scale initiative to save the black-tailed gazelle – a species officially classified as vulnerable – from extinction. Celebrated for its grace and beauty, the Azerbaijani gazelle once roamed the plains from Jeyranchol on the border with Georgia in the west to the Caspian Sea further to the east in their thousands. In the late 1800s, travel writers reported observing grazing herds as far as the eye could see, yet by the early 1960s a census found only 171 animals. Established in 2003, the 54,000-hectare Shirvan National Park now counts more than 6,000 gazelles – the largest population of the species anywhere in Europe.

According to Ms Aliyev, the bounce back of the Azerbaijan gazelle shows what may be accomplished once an executive decision is taken. The first daughter has launched new initiatives to rescue both the endangered Caucasian leopard and the Caspian sturgeon (beluga), listed as critically endangered, which has a lifespan of up to 120 years and grows to a length of five metres or more.

The first results of the conservation programme are promising with increased sightings of the Azerbaijan leopard in the Zangezur National park where females displaying territorial behaviour repeatedly set off camera traps. The country’s Ministry of Ecology and Natural Resources has recently strengthened legal provisions to protect the big cat. A Leopard Record Monitoring Network has been set up with neighbouring countries to track the leopard’s range and facilitate the exchange of data.

“Though only 32, Leyla Aliyev is a force of note – and a remarkable presence – in Azerbaijan and beyond. At times, it seems that Ms Aliyev is determined to personally ensure that Baku – once a dusty boomtown where fortunes were made, and lost, in weeks if not days – becomes the Dubai of the Silk Road.”

As a goodwill ambassador for the Food and Agriculture Organisation of the United Nations, Ms Aliyev has also helped to cement Azerbaijan’s position as a food-secured country. She has been instrumental in the shaping of the FAO’s Country Programming Framework which helps Azerbaijan expand its competitive edge in agriculture by promoting livestock health, plant protection, skills development, and resource management amongst others. FAO Assistant-Director Vladimir Rakhmanin recently praised Azerbaijan’s efforts to reduce food waste with innovative measures that offer blueprints for others to follow.

Though only 32, Leyla Aliyev is a force of note – and a remarkable presence – in Azerbaijan and beyond. At times, it seems that Ms Aliyev is determined to personally ensure that Baku – once a dusty boomtown where fortunes were made, and lost, in weeks if not days – becomes the Dubai of the Silk Road. The city is not far off from attaining its goals. Ms Aliyev is a tireless promoter of the Khazar Islands project – a universe of some 41 artificial islands in the Caspian Sea, linked by 150 bridges and able to withstand a magnitude 9.0 earthquake, that is to house around a million inhabitants by 2030. At its centre, the new $100bn city is to feature the Azerbaijan Tower rising a full kilometre skywards and slated to displace the Burj Khalifa as the tallest building in the world.

In between, Ms Aliyev also helps run the Heydar Aliyev Foundation as its vice-president. The foundation is the driving force behind a growing number of social-impact initiatives and projects in both Azerbaijan and abroad.