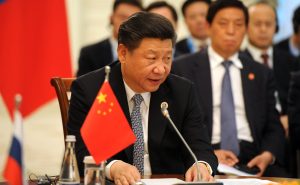 This week, China debuts on the world stage as the unlikely saviour of globalism. President Xi Jinping, an ardent nationalist at home, is expected to remind all who care to listen that free trade must be preserved in order to assure a prosperous future. As he attends the annual meeting of  the World Economic Forum (WEF) in Davos, Switzerland, to spell out platitudes and niceties, President Jinping must also manage a few credibility issues related to his well-documented scepticism of western-style globalism.

The first-ever Chinese president to attend the Davos gettogether of movers and shakers, and billed as the headline attraction of the annual event, Mr Jinping’s presence in the Alpine resort is a clear statement that China aims to push back against the anti-globalist forces that gained strength with Donald Trump’s election to the White House, Great Britain’s imminent departure from the EU, and the ominous rise of nationalism throughout Europe.

Oddly, President Jinping does not seem overly bothered by the attacks on the global village which he considers the preserve of liberal elites that relish denouncing China over human rights and political repression. Just before he assumed office in 2012, Mr Jinping derided “those well-fed foreigners who have nothing better to do than point fingers at our affairs.” This rare outburst from an otherwise guarded leader took place during a tour of Mexico where Mr Jinping also reminded “preachy liberals” that his country does not export revolution or cause trouble.

“Neatly tying in with the WEF’s own advocacy of inclusive growth, the Chinese leader is to present an appealing alternative to Mr Trump’s America First rhetoric and Mrs May’s Brexit utterances.”

In fact, President Jinping has so far kept his cool as the ebullient incoming US president tweeted threats of a trade war and expressed a fondness of all things Taiwanese. In Davos, President Jinping is expected to pull a Plato, presenting himself as a philosopher king dwelling on humanity’s origins, its long march to the present, and its glorious future. According to a January 15 editorial published in the People’s Daily, President Jinping will seek to redirect the course of globalism towards the building of a “common community of human destiny.” Xinhua, the state news agency, reported excitedly that the president’s address in Davos will offer the world a “new concept of win-win, multi-win, and all-win.”

Neatly tying in with the WEF’s own advocacy of inclusive growth, the Chinese leader is to present an appealing alternative to Mr Trump’s America First rhetoric and Mrs May’s Brexit utterances. However, as usual in Davos, not everything is to be taken at face value. On the domestic front, the Jinping Administration does not at all seem enamoured with globalism. China may owe its remarkable ascendancy to a world without borders and easy access to global value chains, that openness increasingly works in one direction only as the government beefs up state-owned corporations to squeeze out multinationals.

President Jinping may wax lyrical about humanity’s shared past, present, and future but meanwhile insists on maintaining absolute state power. He also champions rather bizarre notions such as “Internet sovereignty” which represents nothing short of a censorship clampdown on news and commentary deemed subversive. Simply put: President Jinping does not appreciate free debate, the exchange of ideas, or unapproved thought. For all its economic might and social progress, China remains an authoritarian country that is interested in only one thing: making money.

As the defender of globalism, President Jinping wishes to collapse borders and penetrate new markets in order to keep flooding the world with cheap made-in-China goods while demanding that universal values be left at the gate to the Middle Kingdom. The Davos crowd will provide applause, approving nods, and plenty photo-ops. Whomever promises deliverance from the encroaching forces of protectionism, nationalism, and populism is sure to prove a great hit.

Meanwhile, down in the valley where the masses reside, life continues as before – anger simmering just below the surface of civility. Immigration, a perceived erosion of culture and identity, a lack of jobs that pay above subsistence level, and threats of terrorism all conspire to drive those who really matter – increasingly disgruntled voters – into the arms of demagogues. The global economy may be on the up, but few are buying into that and those who do use credit. When liberal globalists seek to obtain solace from the ruler of an authoritarian state, something has gone very wrong.