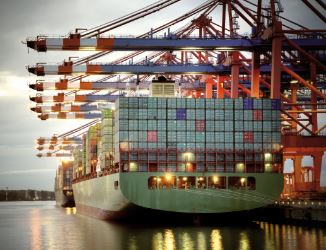 Time is money and a lot of money and opportunities are being lost due to painstakingly long customs procedures, waiting times at ports and long lead times. Although “time is money” is a universal idiom, few have looked into how time is related to money in international economics.

One of those few is David Hummels, an economics professor at Purdue University in the US. He found that one day in transit is equivalent to a tariff rate of 0.8%. He arrived at this number by comparing air freight rates to ocean freight rates for similar products on similar routes and estimating the trade-off between money and time saved by using ocean and air freight respectively.

According to oceanschedules.com, the journey from Shanghai in China to Long Beach in California takes between 12 and 48 days depending on the carrier and as such corresponds to a tariff rate of between anywhere 11 and 34%. This compares to an average tariff on US imports of about 3.4%. Clearly time in transit adds vastly more to trade costs than do tariffs.

Some time for transit is of course inevitable, but as we shall see, time for exports and imports vary substantially across countries even when only the domestic leg of the journey is taken into account. And such differences matter not only for trade volumes, but also for what kind of products are traded.

“Bringing down lead times and lead time variability is therefore essential for firms located far from the major markets.”

Just-in-time organization of production was a critical factor behind the success of Japanese management in the 1980s and beyond. It implies that parts and components arrive at the work station where they are being used at the precise moment they are needed. This saves storage expenses and reduces downtime to a minimum. It is one of the factors that explain why upstream suppliers tend to locate close to their customers. Nevertheless, better, faster and more reliable international transport, communications and supply management tools have made it feasible to combine international fragmentation of production with lean production technologies.

The sourcing of intermediate inputs involves a trade-off between transaction costs and production costs – notably labour costs. Nearby suppliers may have higher labour costs, particularly in rich OECD countries, but may also be more flexible and reliable as far as timely delivery is concerned. With new technologies that improve labour productivity – think robots, 3D printers and sophisticated production monitoring and control software – the balance is now shifting towards locations close to the market.

Bringing down lead times and lead time variability is therefore essential for firms located far from the major markets. To make up for their narrowing unit labour cost advantage, they need to reduce lead times even more than their better located competitors. There are, however, limits to what a firm can do if its goods are stranded in ports or waiting for customs clearance. Firms working under such circumstances may be unable to enter international supply chains or they may have to rely on trading less time-sensitive products that are often also in less dynamic sectors or market segments.

The average time it takes for a product from the factory gate of the exporter till it is loaded on a ship; the time it takes for the ship to make landfall at its destiny and till the product arrives at the premises of the importer; and the cost in US dollars per container by region are depicted in Table 1.

The time and cost of ocean freight is not included in these numbers. We note that it takes three times as long and costs 70% more to export from South Asia as it does from high-income OECD countries. The numbers are similar for imports. Within these regional averages there is large variation. The best performers are Denmark, Estonia, Hong Kong, Singapore and USA with 6 days for exports, while the worst are Afghanistan and Kazakhstan with 81 days.

It is likely that the longer the time for exports or imports, the less predictable is the time of arrival of the goods at their destination. With more variability in lead times, more storage is required – something lean manufacturers have already cut to the bone.

It is therefore practically impossible for firms located in countries where it takes more than a month to export, import, or both, to become suppliers to downstream manufacturers using lean production technologies – or to lean retailers for that matter. Notice that both time for import and time for exports matter for the lead times of a company since being part of the supply chain to lean multinational manufacturers implies importing parts for further processing and exporting.

Fashionable Socks or Plain Ones?

Some products are more time-sensitive than others. Intermediate inputs to firms using lean production technology can be expected to be more sensitive to lead times and lead time variability than raw materials. And plain vanilla socks and towels are less sensitive to time than, say, a fashion retailer’s summer collection. So how does time for exports and imports affect who trades what with whom? 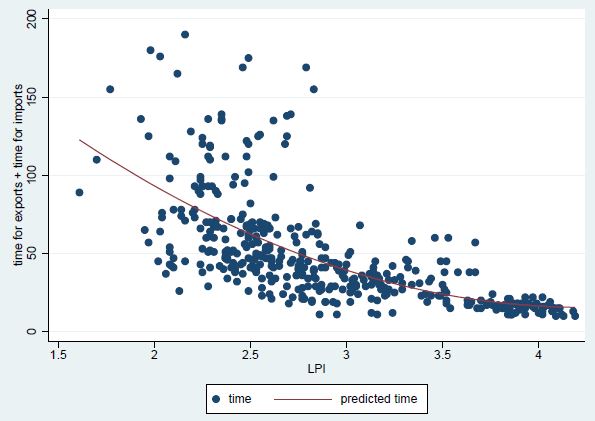 We explored this question by comparing how sensitive different categories of intermediate inputs are to time for trade, to the average for total trade. On average we find that a 10% reduction in the time for exports and imports increases overall trade values by about 1%.

Trade in intermediate inputs is, however, much more sensitive to delays, and trade in parts and components in the transport equipment sector is most sensitive to delays. In this sector 10% reduction in time for trade raises trade by 4% – four times more than the average. This is the sector that made just-in-time management famous, and it still appears to be the leanest broadly defined sector.

For other intermediate goods, a 10% reduction in time for exports and imports is associated with 3% more trade. These estimates add up to significant numbers. For example, it takes on average three times as long to export or import from South Asia than it does from high-income OECD countries. This difference in time for trade is associated with between 90 and 120% more trade in parts and components among OECD countries, taking into account differences in market size, income levels and geography.

The time it takes to trade across borders is determined by the quality of infrastructure and infrastructure management; the competitiveness of the transport sector; and, the administrative procedures related to customs and other border crossing procedures. Among the relevant factors for which comparable data across countries are available, the World Bank’s Logistics Performance Index (LPI) has the strongest effect on time for trade.

The LPI index takes values between 1 and 5 – the latter number representing the best performance. It is plotted against the time it takes for exports plus the time it takes for imports in Figure 1. The chart demonstrates that the better the logistics connectivity, the shorter time for getting goods across the border. We also see that the variation in time for trade among countries is much smaller for the high performers on the LPI index than for those with a low index, suggesting that a low LPI index is symptomatic for wider problems related to getting goods across a border.

Other factors that we found to be strongly related to the time for exports and imports were internet access, which facilitates effective and rapid customs clearance through secured internet portals. The quality of ports and the burden of customs procedures as measured by the World Economic Forum (WEF) indices were also important. Finally, rich countries tend to possess better infrastructure and better institutions that affect the efficiency at ports as well as the inland transport leg of the journey from exporter to destination. Thus, countries tend to have shorter time for exports and imports the richer they are.

A Low Fruit to Pick

For developing countries, upgrading infrastructure at ports as well as road and rail networks may be expensive. It often remains a long-term objective. But reducing the burden of customs procedures and improving the use of existing infrastructure through better and less onerous regulation would be a low-hanging fruit for developing countries to pick and could make a substantial difference, allowing local firms to become more reliable as far as lead times are concerned. This could in turn make it worth the while for firms to invest in better quality that satisfies the requirements of downstream customers in international value chains.

While individual governments can shorten the time for exports and imports considerably by streamlining customs procedures, clamping down on cartels at ports, and liberalize transport and logistics services unilaterally, cross-border cooperation is also important. For example most of the countries in which it takes more than two months to export, import, or both, are land-locked low or middle-income countries. Their performance clearly depends on the time and cost of transit through neighbouring countries. But effective customs procedures in any country to some extent depend on the quality and timeliness of processing the necessary documents at both ends of a trade transaction.

Trade facilitation is one of the policy areas for which there are high hopes of a substantive agreement at the Bali WTO (World Trade Organisation) Ministerial Conference in December 2013. The agreement aims at reducing the cost in terms of time and money to cross borders. To quote the WTO website, the purpose of the trade facilitation agreement is to “….further expedite the movement, release and clearance of goods, including goods in transit”. A successful outcome and its implementation would clearly reduce time for exports and imports and thereby create a better environment for entrepreneurs to invest in becoming suppliers of more sophisticated but time sensitive parts within international value chains.

All countries would gain from this agreement, particularly when combined with domestic reforms. The countries where its implementation would make the largest difference are those with considerable industrial capacity but that perform badly on the WEF (World Economic Forum) indicators of customs and port quality and which have long time for exports and imports.

In such countries entrepreneurs may not have sufficient incentives to invest in quality, since the price premium associated with the upgrading only materialises if goods are reliably delivered on time, all the time. Among the countries that fit this description best are Russia, Ukraine, South Africa, Venezuela and Kenya.

Hildegunn Kyvik Nordås joined the OECD in 2005 where she leads a project on services trade restrictions, their measurement and impact.

Before joining the OECD she worked at the research division in the WTO Secretariat, and she has held positions as senior researcher and research director at Christian Michelsen Institute, Norway.

Her areas of research and analysis are international trade, economic growth and economic development.

She has published a number of journal articles and book chapters in these fields. In addition she has led a number of projects providing technical assistance and policy advise in developing countries, including developing a macroeconomic model with the Planning Commission of Tanzania.