Wangari Maathai: Attaining Peace that Endures, One Tree at a Time 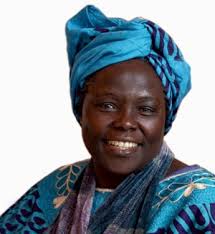 A young Kenyan girl named Wangari Maathai was sent by her mother to fetch some fresh water. As she reached the stream at the end of a pleasant walk, Wangari paused for a moment to quench her thirst drinking from the stream. As she did so, the girl marvelled at the countless tiny frogs’ eggs and tadpoles so clearly visible. She would never forget the taste of that pure water; her playful companions in the stream; and, the boundless and natural luxury of being part of a pristine environment.

Half a century later, Wangari Maathai (1940-2011), founder of the Green Belt Movement, was awarded the Nobel Peace Prize. She marked the occasion sharing her childhood memories and noting with a touch of sadness that the stream had since dried up. “The challenge now is to restore the tadpoles’ home and give back a world of beauty and wonder to our children.”

Ms Maathai took up that challenge a great many years ago. She grew up seeing trees and entire forests uprooted to make way for commercial plantations. As progress arrived for some, women in rural areas would still often go without fuel or clean drinking water. Their diets remained poor and incomplete while concerns over the lack of shelter and money was the order of the day, and indeed of every day.

“It’s the little things citizens do. That’s what will make the difference. My little thing is planting trees.”

Over the years, commercial farming has seriously degraded the environment. Global trade patterns and practices kept crop prices low. As a result, wages remained depressed and would, more often than not, be insufficient to cover even the most basic needs. Poverty endured and would frequently erupt into conflict.

The founding of the Green Belt Movement, attesting to an understanding of the links between human activity and environmental well-being, marked the start of an attempt to empower communities through education and awareness. The Nobel laureate pointed out: “I believe the committee understands that a world at peace is a world that protects and restores the environment.”

The activities of the Green Belt Movement are mostly carried out by women who understand that the best answers do not necessarily come from outside. The movement’s participants realise that it is they that must find and implement home-grown solutions to common problems. In this spirit, more than thirty million trees have been planted by some 4,000 community groups. More than helping to protect and nourish public spaces, these groups work both at grassroots level and on the international scene as advocates for peace.

In Africa, the tree is a traditional and potent symbol for peace. It has been used as such by the Green Belt Movement. In Kenya, the tree came to symbolize conflict resolution and the struggle for democracy. Ms Maathai and her Green Belt Movement were instrumental in plotting Kenya’s return to democracy in 2002. Their efforts, and those of countless others, ushered in a much more stable society.

With a doctorate degree in biology, obtained pursuing studies in Kenya, Germany and the United States, Ms Maathai chaired the National Council of Women of Kenya during most of the 1980s. In 2004, she was the first African woman to be awarded the Nobel Peace Prize.