Africa is rising. These days, one cannot pick up a newspaper or magazine without coming across an article or some piece of insightful and fascinating enunciation about the opportunities in Africa. Africa is ripe for the picking and there is certainly no lack of interest worldwide from potential investors. Be that as it may, potential investors must always ensure that a sound investment plan is put in place when embarking on any investment. This includes both an entry and exit strategy. The focus of this article is on the former and it is premised on the basis that the potential investor will utilize interest bearing funding in order to acquire the equity shares in the target company.

Funding the acquisition of shares in a South African entity

Not all potential investors have a reservoir of cash resources which they can access in order to acquire the shares in a target entity. In most instances, interest bearing funding will be required in order to acquire the relevant shares. The funding can either be sourced from within the group (from a finance entity or the holding company) or from a foreign or local bank. However, before the transaction is implemented, potential investors generally set up a new South African entity (where they do not have an existing presence in South Africa) or they use an existing South African subsidiary in order to undertake the transaction. The South African entity would then be funded, either through equity funding or a combination of equity and debt funding. This funding would then be used to acquire all the shares in the target entity. 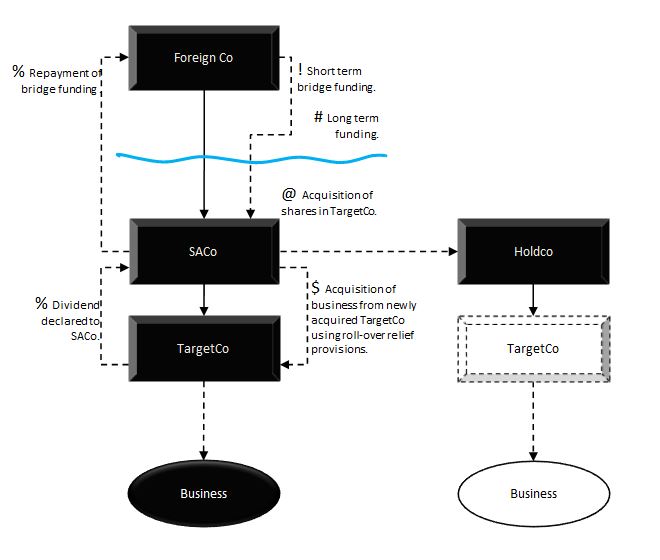 Interest incurred on the loan utilized to acquire the shares

It is a global principle that the treatment of interest incurred on qualifying debt is often more favourable than the treatment of a dividend paid by a company. Whilst a dividend distribution is a simple means of extracting profits from a company it is not without consequences as, from a South African tax perspective, the dividend will be subject to a 15% dividend withholding tax (see discussion above) and the company declaring the dividend cannot deduct the dividend declared from its taxable income. Interest, on the other hand, receives more favourable treatment but it too is not without its own complications.

Firstly, the general principle in South Africa is that interest incurred on a loan utilized to acquire shares is not deductible due to the treatment of dividends as exempt income in the hands of the shareholder. In order to overcome this, creative methods have been employed in order to secure an interest deduction. One such method is the debt push down mechanism which is a global phenomenon and not “proudly South African”. The rationale behind employing such a structure is that interest incurred on a loan utilized to acquire a business is deductible. From a South African tax perspective this structure is implemented together with the so called roll-over provisions in the South African ITA in order to indirectly secure an interest deduction in South Africa. Sound commercial rationale for implementing the debt push down structure is required and it cannot simply be a window dressing exercise. Potential investors must also take cognizance of the South African exchange control provisions and, where a group company provides the requisite funding, the South African thin capitalization and transfer pricing provisions. Furthermore, despite South Africa currently exempting from tax any South African sourced interest earned by a non-resident (provided that the non-resident has not carried on a business through a permanent establishment situated in South Africa), it should be noted that South Africa will be implementing a withholding tax of 15% (before the application of any relevant double tax agreement) on any interest that accrues to a non-resident from a South African source on or after 1 July 2014.

Reprieve may be found in the form of provisions effective from 1 January 2013. These provisions represent a shift from the common law position regarding the deduction of interest incurred on a loan used to acquire shares in an entity. In terms of these new provisions, potential investors may obtain a deduction for any interest incurred on a loan used to acquire more than 70% of the shares in a South African entity. But as expected, not all is sunshine and roses and taxpayer’s are required to approach the South African Revenue Service for a directive permitting the deduction of any interest incurred on the loan utilized to acquire the shares in the target entity. In considering the application for the directive, the South African Revenue Service will consider the tax leakage to the fiscus. Experience has shown that a tax leakage of 15% appears to be acceptable to the revenue authorities and anything beyond this will become a matter of debate as to how much the revenue authorities are willing to part with. Factors that would play a role here would be the aggressiveness of the transaction, the parties involved in the transaction and their reputation in the market and with the revenue authorities.

Potential investors are forewarned however that where foreign interest debt funding is used to fund the acquisition of shares, a directive from the South African revenue authorities would most likely be subject to much scrutiny and debate. Coupled with the soon-to-be-introduced withholding tax on interest as noted above, foreign interest bearing debt funding may not be the order of the day for these particular types of transactions. There may be light at the end of the tunnel though. With careful planning it may be possible for potential investors to increase their chances of a deduction under these new provisions or indirectly via a debt push down structure. Potential investors are therefore advised to seek advice before embarking on an investment in South Africa because if you fail to plan, you plan to fail!

This publication is provided by PricewaterhouseCoopers Inc. for information only, and does not constitute the provision of professional advice of any kind. The information provided herein should not be used as a substitute for consultation with professional advisers. Before making any decision or taking any action, you should consult a professional adviser who has been provided with all the pertinent facts relevant to your particular situation. No responsibility for loss occasioned to any person acting or refraining from action as a result of any material in this publication can be accepted by the author, copyright owner or publisher.