Revenue Watch: 4 out of 5 Companies Fail in Good Governance 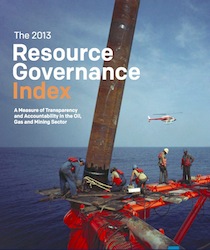 The Resource Governance Index (RGI) measures the quality of governance in the oil, gas and mining sector of 58 countries. From highly ranked countries like Norway, the United Kingdom and Brazil to lowranking countries like Qatar, Turkmenistan and Myanmar, the Index identifies critical achievements and challenges in natural resource governance.

The 58 countries produce 85 percent of the world’s petroleum, 90 percent of diamonds and 80 percent of copper. Profits from their extractive sector totaled more than $2.6 trillion in 2010. In 41 of these countries, the extractive sector contributed a third of gross domestic product and half of total exports on average. Revenues from natural resources dwarf international aid: In 2011, oil revenues for Nigeria alone were 60 percent higher than total international aid to all of sub-Saharan Africa. The future of these countries depends on how well they manage their oil, gas and minerals.

Mismanagement and corruption have many manifestations and can have dire consequences. Some countries negotiate poor terms with extractive companies, forsaking potential long-term benefits. Many countries do not collect resource revenues effectively. And even when resource revenues do end up in government coffers, they aren’t always spent in ways that benefit the public. Too often, governments keep citizens and civil society leaders in the dark regarding government contracts and resource revenues. This opacity deprives the public of a voice or even representation in basic decisions on natural resources.

The RGI is based on the premise that good governance of natural resources is necessary for the successful development of countries with abundant oil, gas and minerals. It provides a diagnostic tool to help identify good practices as well as governance shortcomings.

The RGI evaluates four key components of resource governance in each country: Institutional and Legal Setting; Reporting Practices; Safeguards and Quality Controls; and Enabling Environment. The Index (See Figure 1) assigns a numerical score to each country and divides them into four performance ranges—satisfactory (71-100), partial (51-70), weak (41-50) and failing (0-40).

The RGI shows a striking governance deficit in natural resource management worldwide. Only 11 countries earn an overall score of above 70. The vast majority of countries exhibit serious shortcomings in resource governance.

More than half the sample, 32 countries, do not meet even basic standards of resource governance, performing weakly or simply failing. Among the 15 failing countries, seven score below 30: Cambodia, Iran, Qatar, Libya, Equatorial Guinea, Turkmenistan and Myanmar. As of 2012, when the data collection took place, these countries failed to disclose any meaningful information about the extractive sector and lacked basic governance standards.

There is room for improvement even among the 11 top-ranked satisfactory performers. For example, Brazil and Chile fail to publish their extractive industry contracts. Western Australia does not require public officials to disclose information about their financial interest in mining projects.

An examination of the four RGI components clearly shows the endemic nature of the resource governance deficit. Only Norway, the United Kingdom and the United States (Gulf of Mexico) earn a satisfactory score in all four components, leaving 95 percent of the sample without satisfactory standards in one or more areas. In the Reporting Practices component, the vast majority of countries (45 out of 58) have partial, weak or failing standards of transparency. In these countries, citizens lack access to fundamental information about the oil, gas and mining sector. For instance, a country might provide little or no information about which companies (domestic and foreign) operate in the extractive sector, how much the government collects in resource revenues and where those funds are allocated.

The governance deficit is largest in the most resource-dependent countries.

Of the 58 countries in the RGI, 41 are classified as resourcerich by the International Monetary Fund.5 That is, in each of these countries, oil, gas and/or minerals dominate the economy, making up at least 25 percent of gross domestic product (GDP), exports or government revenues. Only five of the 41 countries (Norway, Mexico, Chile, Peru and Trinidad and Tobago) have satisfactory standards of resource governance (a composite score of 70 or more). 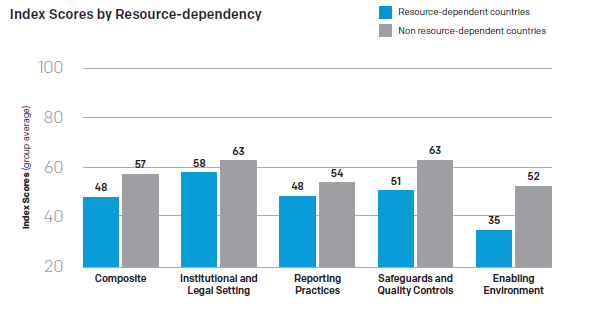 Transparency is missing in the countries where it is needed most. Nine of the 15 failing performers (Algeria, Cameroon, the Democratic Republic of Congo (DRC), Equatorial Guinea, Iran, Libya, Qatar, Saudi Arabia and Turkmenistan) are among the most resource-dependent countries in the world. In 2010, resource profits in these countries totaled more than $530 billion, or about $1,500 per capita; oil, gas and mining contributed an average of 34 percent of GDP and a staggering 60 percent of total government revenues. Resource wealth of this scale affects every aspect of economics and politics in these countries. Yet governments provide the public negligible, if any, information about the industry on which their economic future depends.

Six of the 11 top performers are middle-income countries—Brazil, Chile, Colombia, Mexico, Peru, and Trinidad and Tobago—showing that being wealthy is not a precondition for good governance. And with the exception of Brazil, all are resource-rich, demonstrating that resource dependence does not preclude transparency and accountability. The Index shows it is possible to adopt high reporting standards, including disclosure of timely, extensive information on operations and primary sources of revenue, when the extractive sector is of the utmost political and economic importance.

Even countries facing significant economic challenges exhibit good practices in selected components. For instance, Timor-Leste has adopted transparent and accountable systems for managing its oil wealth. And though Guinea’s overall minerals governance is weak, it recently initiated reforms to improve, as reflected in its high Institutional and Legal Setting score. Afghanistan and the DRC, both rated failing for overall resource governance, recently decided to publish most of their extractive contracts. These improvements could be a springboard for more decisive resource governance reforms.